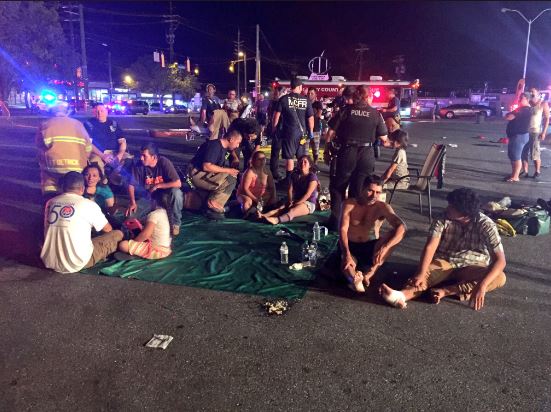 MONTGOMERY COUNTY, Md. (ABC7) – Firefighters are on the scene at an apartment complex in Montgomery County where an “explosion” and fire left “multiple” people injured, according to fire officials.

Some of the injuries were the result of people jumping out of windows, according to Chief Goldstein. Children were also reportedly being dropping from windows for fear of their safety, while others were able to access work ladders from trucks in the neighborhood.

The incident, which was originally reported on Twitter by Montgomery County Fire’s Pete Piringer around midnight Wednesday, resulted in a raging three-alarm fire at the Flower Branch Apartments in the 8600 block of Piney Branch Road.

It’s unclear at this time if there are any fatalities, according to Piringer who also says all occupants have not yet been accounted for.

Chief Goldstien says they are now implementing search dogs to try and find those missing.

It appears around 20 to 30 people were injured during the fire. Injuries range from minor to serious, including burns and fractures from those who jumped from windows, according to Chief Goldstein.

Goldstein says around 30 people were taken to nearby hospitals, at least three of them being firefighters.

Building debris was scattered throughout a nearby parking lot following the explosion. Witnesses described hearing a loud “boom” and some nearby even report they felt their home shake.

Firefighters say they felt the explosion at the Four Corners Fire Station 16, which is about six miles away. It was initially thought to be a transformer explosion.

The cause of the explosion remains under investigation.

Chief Goldstein reports the explosion resulted in a building collapse.

Washington Gas says that natural gas to the apartment building was shut off around 1:45 a.m. There are gas stoves and furnaces in each apartment, according to Chief Goldstein.

Around 3 a.m., hours after the fire reportedly broke out, fire officials said that “hot spots [were] being controlled” and the process would be an “extended operation.”

Temporary shelter for those affected by the fire has been put into place at the Long Branch Comunity Center at 8700 Piney Branch Road.

An estimated 90 residents were displaced.

Chief Goldstein stated the fire happened at a very inopportune time, as most people were at home and asleep.

Four additional buildings in the 8600 block are in danger of further collapse, according to fire officials.

One hundred firefighters and 90 units responded to the fire, according to Chief Goldstein.