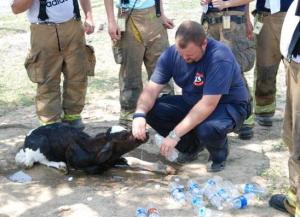 ALLENSVILLE, Pa. – Just after 10:30 hrs Friday, Mifflin County (PA) Communications Center dispatched the assignment for a working barn fire on State Route 655 in Allensville, PA. It was over 100 degrees at the time of the dispatch.

After a 22 mile response Rehab 12 arrived to find they were the first and only EMS unit on the scene and had multiple firefighters down due to the heat.

A Rehab sector, staging area and treatment areas were rapidly established in a nearby meadow. Five BLS ambulances, two ALS ambulances and an additional Rehab unit were requested. FAME EMS’s well-trained Rehab staff rapidly deployed a special rapidly inflated shelter, misting fans and two(2) specialty air conditioning  units that use water to cool the air being blown through the towers.

Members of the local Amish community came to the aid of the EMS personnel, assisting as directed until additional EMS resources could arrive.

An estimated 100 firefighters from four counties were on scene. The Rehab crews were credited with outstanding work at rehab, re-hydrating and medically evaluating all firefighters on scene. Rehab 12 and other EMS & rehab crews operated at the scene for over four hours. Because of the Rehab efforts, no firefighter required EMS transport from the scene.

Just as fire and rehab operations were wrapping up, a two-day old calf was found unresponsive. After 10 minutes of aggressive resuscitation by the rehab crew the calf was up moving around.