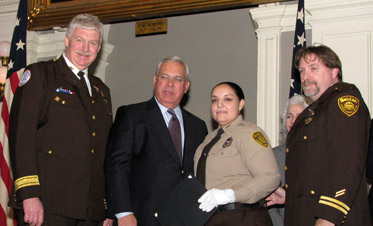 ROSLINDALE – Boston EMT Katrina Sanchez was on her way home from work when she saved an elderly man from choking in his car at the intersection of Blue Ledge Drive and Highcrest Road in Roslindale.

With the help of another person, Sanchez helped the man out of his car, gave him a couple of back slaps and performed the Heimlich maneuver to remove the obstruction from his throat.

Sanchez saw the man choking on chips while in his parked car and she immediately jumped in to help. After performing the Heimlich maneuver, Sanchez called 911 and tended to the man until her Boston EMS colleagues arrived.

The victim continued to have trouble breathing and was transported to Faulkner Hospital for more care.

Sanchez graduated with the most recent Boston EMS Academy class in January, and was praised for her actions Wednesday.

I am extremely proud of the immediate actions taken by EMT Sanchez, said Boston EMS Chief Rich Serino. She showed no hesitation in helping this man, and her quick thinking and actions may have saved his life.