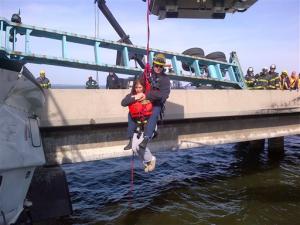 NEWPORT NEWS, Va. (AP) – A driver who was rescued from the mangled cab of her tractor-trailer while it dangled from the Monitor-Merrimac Bridge Tunnel has been charged in the wreck.

Virginia State Police say 43-year-old Almira Ribic of Newport News was charged with reckless driving Monday after she was plucked from the cab.

The tractor-trailer went out of control on Interstate 664 and struck the bridge just before 9 a.m. The truck caught fire and the cab was hanging over the bridge that connects Suffolk and Newport News. Firefighters rappelled from an elevated platform to rescue Ribic.

State police shut down the southbound lanes due to more than 150 gallons of diesel fuel that were spilled during the crash.