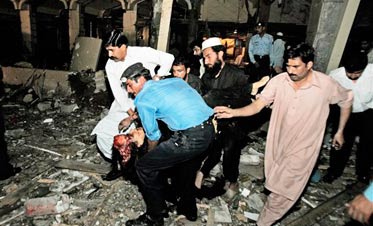 The blast, one of the largest terrorist attacks ever in Pakistan, left a vast crater some 30 feet deep in front of the main building, where rescuers ferried a stream of bloodied bodies.

There was no immediate claim of responsibility. The BBC reported that U.S. citizens, as well as British, Saudi, German and Afghan nationals were among the dead.

Witnesses said a large truck rammed the high metal gate of the hotel about 8 p.m., when the hotel’s restaurants would have been packed with diners, including Muslims breaking the Ramadan fast.

WITNESSES
Hotel employee Mohammad Sultan said he was in the lobby when the bomb went off. “I didn’t understand what it was, but it was like the world is finished,” he said.

Amjad Ali Khan, a guard on duty at a side entrance to the hotel, said he helped carry 40 bodies out of the hotel. He said they were “in the lobby and in the restaurant and everywhere. There were very few people injured. They were all dead.”

A U.S. State Department employee, who identified himself only as Tony, said he and three colleagues had begun moving toward the rear of the Chinese restaurant after an initial small blast and that a second explosion threw them against the back wall. “Then we saw a big truck coming to the gates. After that it was just smoke and darkness.”

REACTION IN THE U.S.
President Bush: “This attack is a reminder of the ongoing threat faced by Pakistan, the United States and all those who stand against violent extremism. [The U.S. will] assist Pakistan in confronting this threat and bringing the perpetrators to justice.”

Barack Obama: “As the attack [last week] on our embassy in Yemen shows, over seven years after 9/11, the terrorist threat knows no borders, and the terrorists threaten innocent civilians of all religions and regions. Now is the time to refocus our efforts on defeating al-Qaida and securing the American people.”

John McCain; “While no organization has yet taken responsibility for this act, it is well known that Pakistan faces an enduring threat from violent Islamic extremism. We must work with the elected government of Pakistan to find those responsible . . . and diminish their ability to threaten us and our allies in the future.”

‘AN OASIS OF SAFETY’
“The Marriott is an icon. It’s like the twin towers of Pakistan. It’s a symbolic place in the capital of the country, and now it has melted down.”

NDTV in New Delhi said the Marriott in Islamabad “was the virtual refuge of expats in the capital. The Coffee Shop was a favorite hang out and the Chinese restaurant Dynasty was the one place to go to celebrate a birthday or an anniversary. . . . Pakistan can sometimes feel a nerve-wracking place, but an oasis of safety has always been the Marriott Hotel in Islamabad. It has a secure perimeter of gates and fences, a metal detector as you go in, and armed guards all over.”

NEW PRESIDENT WARNS U.S. ON BORDER ATTACKS
President Asif Ali Zardari, while vowing to root out terrorists, used his first address to parliament to issue a warning on Saturday about U.S. attacks against extremists on Pakistani soil. “We will not tolerate the violation of our sovereignty and territorial integrity by any power in the name of combating terrorism,” he said in a comment that was broadly greeted by legislators, who loudly thumped on their desks to show their support.