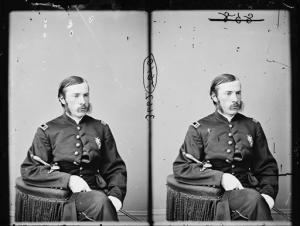 SPRINGFIELD, Ill. (AP) – The first doctor to reach President Abraham Lincoln after he was shot in a Washington theater rushed to his ceremonial box and found him paralyzed, comatose and leaning against his wife. Dr. Charles Leale ordered brandy and water to be brought immediately.

Leale’s long-lost report of efforts to help the mortally wounded president, written just hours after his death, was discovered in a box at the National Archives late last month.

The Army surgeon, who sat 40 feet from Lincoln at Ford’s Theater that night in April 1865, saw assassin John Wilkes Booth jump to the stage, brandishing a dagger. Thinking Lincoln had been stabbed, Leale pushed his way to the victim but found a different injury.

“I commenced to examine his head (as no wound near the shoulder was found) and soon passed my fingers over a large firm clot of blood situated about one inch below the superior curved line of the occipital bone,” Leale reported. “The coagula I easily removed and passed the little finger of my left hand through the perfectly smooth opening made by the ball.”

The historians who discovered the report believe it was filed, packed in a box, stored at the archives and not seen for 147 years. While it doesn’t add much new information, “it’s the first draft” of the tragedy, said Daniel Stowell, director of the Papers of Abraham Lincoln.

“What’s fascinating about this report is its immediacy and its clinical, just-the-facts approach,” Stowell said. “There’s not a lot of flowery language, not a lot of emotion.”

A researcher for the Papers of Abraham Lincoln, Helena Iles Papaioannou, found the report among the U.S. surgeon general’s April 1865 correspondence, filed under “L” for Leale.

Physicians continue to debate whether Lincoln received proper treatment. With trauma treatment still in its infancy, Leale’s report illustrates “the helplessness of the doctors,” Stowell said. “He doesn’t say that but you can feel it.”

“For his time, he did everything right,” said Dr. Blaine Houmes, a Cedar Rapids, Iowa, specialist in emergency medicine who has studied the assassination. Accounts vary about how Leale did it – Houmes thinks he might have pounded on the victim’s chest – but the doctor resuscitated the president.

“When Dr. Leale got into the president’s box, Lincoln was technically dead,” Houmes said. “He was able to regain a pulse and get breathing started again. He basically saved Lincoln’s life, even though he didn’t survive the wound.”

Leale wrote a report for an 1867 congressional committee investigating the assassination that referenced the earlier account, but no one had ever seen the original, said Stowell, whose group’s goal is to find every document written by or to Abraham Lincoln during his lifetime.

At least four researchers have been painstakingly scouring boxes of documents at the National Archives for more than six years. They methodically pull boxes of paper – there are millions of records packed away and never catalogued, Stowell said – and look for “Lincoln docs,” as Papaioannou called them.

She was assigned the surgeon general’s mail and was leafing through letters pitching inventions for better ambulances and advice about feeding soldiers onions to ward off disease when she hit Leale’s report, likely rewritten in the neat hand of a clerk.

Leale, who was 23 and just six weeks into his medical practice when Lincoln died, never spoke or wrote about his experiences again until 1909 in a speech commemorating the centennial of the president’s birth.

While Leale’s report includes little sentiment, Papaioannou believes the way he described the moments after Booth disappeared shows how deeply he was affected.

“I then heard cries that the ‘President had been murdered,’ which were followed by those of ‘Kill the murderer’ ‘Shoot him’ etc. which came from different parts of the audience,” Leale wrote. “I immediately ran to the Presidents box and as soon as the door was opened was admitted and introduced to Mrs. Lincoln when she exclaimed several times, ‘O Doctor, do what you can for him, do what you can!'”

The Papers of Abraham Lincoln, administered by the Abraham Lincoln Presidential Library and Museum in Springfield, has found and is digitizing 90,000 documents, Stowell said. Leale’s report – neither written by or to Lincoln – doesn’t technically fall in the group’s purview, but Stowell said some exceptions are made for extraordinary finds.

John O’Connor can be reached at https://www.twitter.com/apoconnor