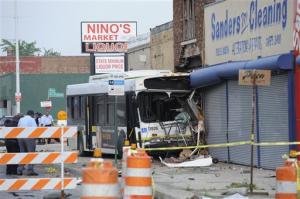 DETROIT (WDIV) – Investigators are working to determine what caused the driver of a DDOT bus to cross over into oncoming traffic early Tuesday morning on Warren Avenue and slam into a dry cleaner’s building.

The crash happened just before 7 a.m. near Haverhill Street, outside Sanders Dry Cleaning.

DDOT director Dan Dirks said the driver was pronouced dead at the scene.

“This is a tragic day for us at DDOT,” Dirks said. “We lost one of our own, and it’s not something we take lightly. We’re a family at DDOT.”

Dirks couldn’t say whether the driver had a medical issue.

“It’s been my experience of 35 years in transit, things that look initially like one thing can be just the opposite. So, that’s why respect the process,” Dirks said.

Brandi Torbert was one of several passengers on that bus when it crashed.

“We were just hysterical. We couldn’t believe it happened so fast,” she said. “We tried to kick the door in. We couldn’t get the door opened. So another man opened up the emergency window climbed out the window.”

While all the passengers rushed off the bus, the driver remained.

“He didn’t say nothing. We thought he got off the bus until we looked around and got off and we didn’t see him,” Torbert said.

Only one other person had to be taken to the hospital for injuries.

Copyright 2014 by ClickOnDetroit.com. All rights reserved. This material may not be published, broadcast, rewritten or redistributed.