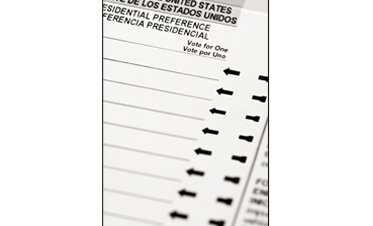 SAN ANTONIO — Betty Owen is 92 and after a stroke four years ago, needs a feeding tube and can’t walk. But she was determined not to miss Tuesday’s election. She arrived at her polling place on a gurney in an ambulance, where an election judge and support worker climbed aboard with an electronic voting machine and let her cast her ballot.

“And you have voted,” precinct judge Sam Green said after Owen pushed the red button finalizing her choices. “You know, you look so pretty in that red dress.”

Her daughter arranged for the ambulance ride at the last minute after Owen failed to get an absentee ballot.

Owen, a Marine Corps veteran who served in World War II, cast her first ballot for Wendell Willkie, a Republican running against Franklin D. Roosevelt in 1940.

She became a Democrat after voting for John Kennedy in 1960. She cast a straight Democratic ballot Tuesday.