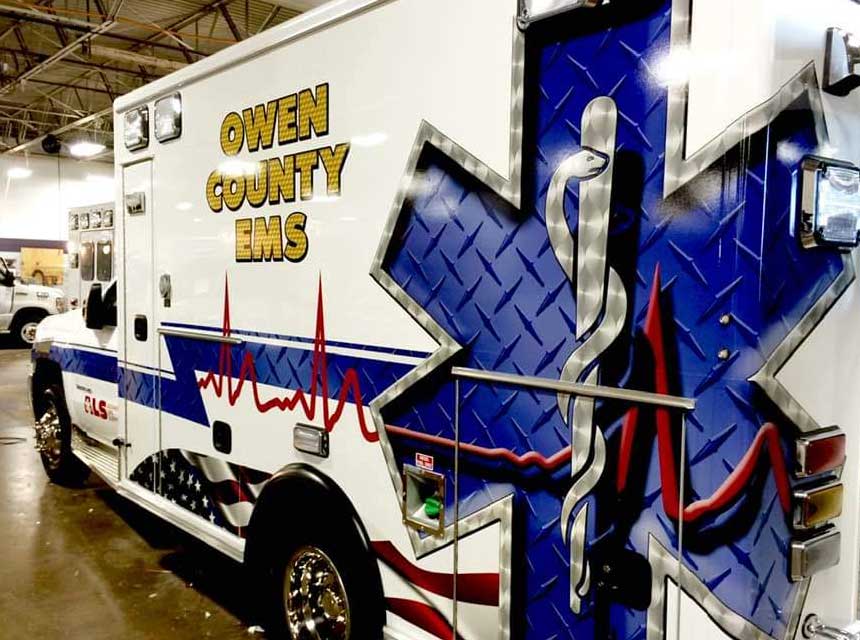 Cris Lunsford told Owen County Council members Wednesday morning that he wouldn’t be able to present his 2022 budget as scheduled later that day.

Paramedic Brandon Staley died Sunday after collapsing from an apparent heart attack while on duty. He and other rescuers had responded to a traffic accident near Gosport where two children had been badly hurt.

“He selflessly continued care, knowing all the while he was having a heart attack,” Lunsford told the council. “He continued his work until he had an IV and pain meds for a little girl whose leg was badly broken. Then he sat down and went into cardiac arrest.”

Council members told Lunsford he could present his budget another time. Later that day, during his appointed budget slot, all seven council members went to the EMS station to place flowers on an ambulance parked out front serving as a memorial to Staley.

They bowed their heads, and councilman Nick Robertson said a prayer. They left flowers.

Lunsford had last Sunday off and was out with his wife cruising around Owen County in their Jeep that afternoon when he got word around 5:40 p.m. of a high-speed crash in a curve on Ind. 67 near Culross Road.

A car had taken out a guardrail and traveled down a steep embankment before landing pretty far from the road in a cornfield. Lunsford went to the EMS station, retrieved an off-road transport vehicle and took it to the accident scene.

By the time he arrived, Staley and EMT Holly Wheeler had carried the two injured children back up to an ambulance and were tending to their injuries and preparing to head out.

A firefighter got behind the wheel to drive. It was about 20 miles to IU Health Bloomington Hospital. Staley and Wheeler worked on the kids in the back of the ambulance as it traveled east.

In the meantime, Lunsford got the two adults into the off-road vehicle and transported them up the hill to a second ambulance waiting on the road. He stayed in the back and tended to them as a medic drove that ambulance to the hospital.

On the way to Bloomington, Lunsford heard on the EMS scanner that the first ambulance had requested a paramedic intercept, asking that an ambulance from the hospital meet them en route from the Gosport crash.

“I assumed one of the children had taken a turn for the worse and that they needed an extra set of hands,” he said. “I knew something had gone bad.”

But the patient was Staley, who had lost consciousness in the ambulance. Lunsford said Wheeler had noticed Staley was pale and having chest pain. When she saw him pushing his fist into the center of his chest, he gave a thumbs up and said he was fine.

The ambulance was already on the Ind. 45/46 Bypass and there was no time to wait for the intercept, so the driver continued speeding toward the hospital. Paramedics, nurses and doctors were ready at the emergency room entrance.

“They were waiting in the ambulance bay and they got the children out and then got Brandon out. They were ready and started on him right away,” Lunsford said.

“He was performing his duties, putting those in need of care first. He had been with us for over a decade and in recent time, had been serving as assistant director. We lose a highly trained medical professional, and our EMS team loses a family member,” he wrote.

“Our sincerest condolences extend to Brandon’s family and all that know and love him. Brandon’s service and contributions will forever be remembered.”

Staley’s funeral will be 1 p.m. Wednesday at Day & Deremiah-Frye Funeral Home in Bloomington. Visitation there will be 4-8 p.m. Tuesday and from 11 a.m. until the time of the funeral Wednesday. A procession after the funeral will end at the Owen County EMS headquarters in Spencer.