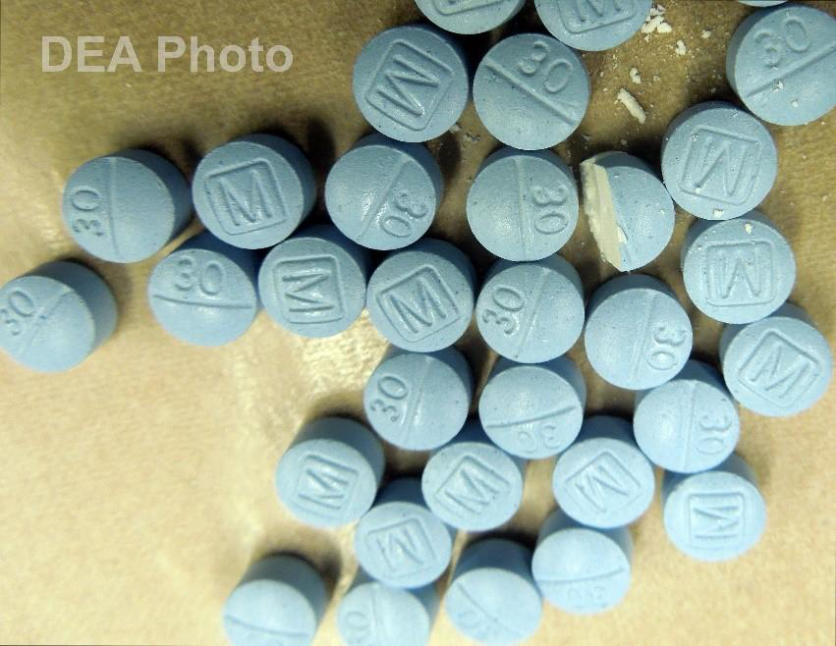 Counterfeit pills, above, seized by the Drug Enforcement Administration.

Mexican drug cartels are manufacturing mass quantities of counterfeit prescription pills containing fentanyl, the agency said Monday. Fentanyl is a dangerous synthetic opioid that is lethal in small doses and is being distributed throughout North America.

Based on a sampling of tablets seized nationwide between January and March 2019, the DEA found that 27% contained potentially lethal doses of fentanyl.

Fentanyl and other synthetic opioids remain the primary driver behind the ongoing opioid crisis, with fentanyl being involved in more deaths than any other illegal drug, the federal government said.

The Centers for Disease Control and Prevention reports West Virginia, Ohio, and New Hampshire had the highest death rates from synthetic opioids, and the largest increase in synthetic opioid overdose death rates was in males between the ages of 25 and 44.

A lethal dose of fentanyl is estimated to be about two milligrams, but can vary based on an individual’s body size, tolerance, amount of previous usage and other factors.

0
In addition, the SAFD has been recognized by the Congressional Fire Services Institute (CFSI) and Masimo with the 2020 Excellence in Fire Service-Based EMS Award. The SAFD received the award for developing a novel whole blood program which provides blood transfusions en route to the hospital, instead of a saline solution at the scene of an emergency to patients.