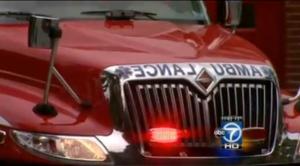 WASHINGTON (WJLA) – When D.C. ambulances like Medic 31 respond to an emergency, a sense of urgency can make all the difference.

However, when one of the city’s ambulances has a significant mechanical flaw that has gone unfixed for weeks, it can put patience and first responders in further danger.

Documents obtained by ABC7 reveal that crew members have been documenting for months now an air hose leak that affects the brakes in the city’s Medic 31 unit, but the problem still hasn’t been fixed.

According to three inspection reports from Aug. 4, 11 and this week, crew members noted with an “X” that the ambulance had the specified leak.

Ken Lyons, the head of the Civilian Paramedics Union, works out of Medic 31. He says that this particular problem can actually delay the ambulance from leaving the station for up to two minutes since it takes time for the air pressure to build up.

Others say the delay is closer to three to five minutes.

The final entry stated that “M-31 air break takes some time to release causing us to delay response. Notified house officer about this problem.”

Lyons says that the unit recently went in for repairs, but when it returned, the leak still hadn’t been fixed.

For months, district residents have been witness to evidence of an ambulance fleet in disrepair, from units catching fire to having no air conditioning to a unit in the presidential motorcade running out of gas.

“We’ve known we’ve had problems,” D.C. Fire Chief Ken Ellerbe said. “The fleet has been challenged. We’ve had some very old equipment and we’re about to replace it.”

On Tuesday, Ellerbe and Mayor Vincent Gray announced that the city had hired 60 new fire cadets and nine paramedics to alleviate staffing shortages. The city is also adding 30 new ambulances to its fleet.

The announcement came on the heels of the International Association of Firefighters, one of the nation’s most prominent fire unions, accused Ellerbe’s agency as being one of the worst in the nation.