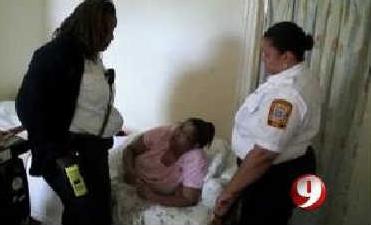 Most of us call 911 in a real emergency: heart attack, house on fire, someone trying to break in. But last year, there were 30 people who called DC Fire and Emergency Medical Services a total of more than 2,000 times.

So paramedics set out to see what the problem was, and how to solve it.

DC’s Engine Ten is the busiest in the country. 80 percent of it’s emergency responses are medical calls. And a huge chunk of those are far from emergencies.

Six paramedics are part of a unit named Street Calls that has been visiting the most frequent 911 callers to see if they can help them before they call again.

“Every time I had an appointment, they were calling DC Fire to bring me in the house,” says Joyce McWain Gray. Her private ambulance service was calling 911 twice a day just to get her in and out of her house for doctor’s appointments.

Since the Street Call paramedics first visited, and called the ambulance service, McWain Gray has only had to reach out to 911 twice.

The paramedics also visited a woman who had called 911 161 times. It turned out she had been inhaling from an empty container of asthma medicine for the previous 9 months.

“She no longer calls 911 on a daily basis, and most important, she’s at home, very comfortably,” says Fire Chief Dennis Rubin.

William Andrews was calling 911 every other day because Medicaid had stopped paying for his asthma, heart, and COPD medicine.

Street Calls got him a social worker, and straightened out his Medicaid mess.

“Thanks, man!” he said, hugging one of the paramedics.

The fire chief says Street Calls has been good for everyone. It’s saving money and reducing wear and tear on the fire units. And the patients are getting help before their problems turn into emergencies.

Street Calls took a look at 25 people it’s worked with so far. Simple things like getting their medicine refilled, or finding them a place to live, have helped reduce their calls to 911 by 60 percent.