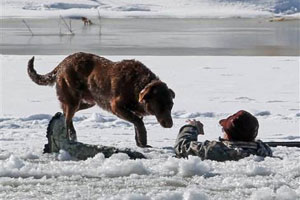 GRAND JUNCTION, Colo. (AP) – A hunter who broke through ice on the Colorado River has been rescued after spending more than 30 minutes in frigid water.

Grand Junction Fire Department spokesman Mike Page says the man had gone onto the ice after a dog that was retrieving a duck or goose around noon Tuesday. Cavaliere says other hunters saw the man fall and called 911. The dog was fine and running around in the 14-degree weather when firefighters arrived.

KKCO-TV in Grand Junction reports (http://bit.ly/107zHtx ) the man held onto an ice shelf with one leg outside the water until a firefighter with a floating board swam out and helped him to shore.