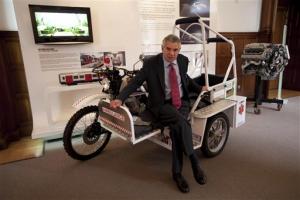 LONDON (AP) – A bit of creativity never hurts, especially when it comes to solving health problems in developing countries.

Instead of the usual donated medicines and health equipment, some experts are inventing new products for the poor, like a solar-powered hearing aid or a motorcycle ambulance. Both inventions were showcased at an engineering conference in London.

And in a new report published online Monday in the journal Lancet, the United Nations highlights innovations like using text messages in South Africa to remind women with HIV to get their babies tested and tucking medicines into Coca-Cola crates to reach remote villages.

Hundreds of thousands of replacement joints, surgical tools and other medical devices have been sent to poor countries over the years. But according to the World Health Organization, about 75 percent of the donated goods sit unused, either because they’re broken or no one knows how to use them.

“In the past, there’s been a lot of good will and bad judgment in the West,” said Chris Lavy, an orthopedic surgeon at the University of Oxford who previously worked in Africa.

Lavy said many African hospitals get dozens of different types of hip or knee replacements that are often unusable. “It’s like you need a spare tire for your Volkswagen but they send you a Mercedes radiator instead,” he said.

He said inventions like the solar-powered hearing aid could make a big difference in Africa. Experts estimate two-thirds of the 250 million people worldwide who have a hearing disability live in poor countries.

The solar-powered device was designed by Andrew Carr, a mechanical engineer in Cambridge, who noticed most hearing aids donated to Africa don’t help because they treat a different type of hearing loss more prevalent in the West. The hearing aid Carr developed must be held close to the ear to work, but doesn’t have to be worn inside.

Carr’s device has an internal solar-powered battery and can be looped into a necklace or attached to a hat so it’s next to the person’s ear. “It blends in with local tribal cultures better than the light pink hearing aids for Caucasians that get donated,” Carr said. Carr is in talks with some charities about testing the hearing aid in Africa and hopes to secure more funding to mass produce the device.

The U.N. report calls for more unorthodox health solutions, and details how health officials are now using Coca-Cola’s supply chain to deliver anti-diarrhea treatments in Zambia. The medicine is sent in a special pod that sits in the unused space inside Coca-Cola crates.

“To piggyback onto (Coca-Cola’s) distribution system is a great opportunity for medicines,” said Tore Godal, a health adviser to the prime minister of Norway, who led the U.N. report. He said officials are also interested in using the soft drink crates to deliver ivermectin, a pill given to many Africans once a year to prevent river blindness.

Other experts agreed new innovations can help and even create a sustainable market for health products, as long as researchers do their homework first.

That was the idea behind the eRanger, a motorcycle ambulance with a sidecar stretcher capable of driving through the African bush terrain. “The donated ambulances (from the West) won’t do 100 yards in Africa,” said Mike Norman, a British engineer who designed the motorcycle ambulance.

So far, Guinea, Malawi, Tanzania and South Africa have bought the ambulances, which sell for about $6,200. Last year, George Clooney, Brad Pitt, Matt Damon and others donated $250,000 to UNICEF in Southern Sudan specifically to buy the vehicles.

Norman says health officials have focused on using them to get pregnant women to health clinics to deliver their babies. Since the motorcycle ambulances were introduced in one district of Malawi several years ago, death rates among mothers have dropped 60 percent.

“What really matters is if it’s acceptable to people and if they will pay for it and use it,” said Ted Bianco of the Wellcome Trust, who was not linked to any of the inventions or the U.N. report. “Because you could have a really fantastic invention, but if it’s sitting on a shelf somewhere, it won’t do any good.”