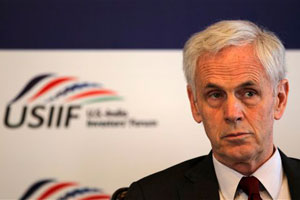 The Commerce Department said John Bryson, 68, suffered a seizure in connection with Saturday’s accidents and has returned to Washington after being released from a hospital.

The department said Bryson was on personal time, was driving his own vehicle and did not have any security detail. He was given medication to treat the seizure.

The secretary was driving alone in a Lexus on a major street in San Gabriel when he allegedly struck the rear end of a vehicle that had stopped for a passing train.

He spoke briefly with the people in the car and hit it again as he departed, officials said. The car followed him while the people called police.

Bryson then allegedly struck a nearby car minutes later, the Los Angeles County Sheriff’s department and the San Gabriel Police Department said in a joint statement.

Bryson was found alone and unconscious in his car and was treated at the scene before being taken to a hospital.

There was no immediate indication that alcohol or drugs played a role, the departments said. Duran said authorities don’t know if Bryon had a prior medical condition.

“When the first officer rolled up on the scene, he was behind his wheel unconscious,” Duran said. “But our officer did speak with him at the hospital.”

David Axelrod, senior adviser to President Barack Obama, said on CBS’s “This Morning” that he doesn’t have any details.

“This news broke overnight, so I don’t have anything to contribute to that,” he said.

Two people in the first collision were treated by paramedics after complaining of pain, the officials said. The couple involved in the second crash also complained of pain but declined medical aid. Damage to the vehicles was minor.

As secretary, Bryson has played a role as a member of the president’s economic team and has worked to promote job creation.

Obama swore in the former utility executive to head the Commerce Department in October, after he easily overcame conservatives’ objections that his pro-environmental views made him unsuited for the job.

Bryson is the former head of Edison International, the holding company that owns Southern California Edison. Bryson has also served on boards of major corporations including the Boeing Co. and the Walt Disney Co.