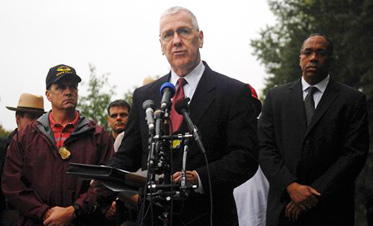 PRINCE GEORGE S COUNTY, Md. — A nearly 20-year-old Maryland State Police helicopter that crashed in darkness and fog over the weekend, killing four people, was not equipped with an advanced electronic system that helps prevent pilots from slamming into the ground in low-visibility conditions, federal transportation officials said yesterday.

Investigators with the National Transportation Safety Board said they were still working to determine the cause of the crash in Prince George’s County, the deadliest incident in the 38 years state police have been flying medical evacuation missions. Meanwhile, the lone survivor, 18-year-old Jordan Wells, was listed in critical but stable condition at Maryland Shock Trauma Center.

At a news conference in District Heights, NTSB officials stressed that they were investigating all possible factors leading to the crash – including possible pilot fatigue, training issues and mechanical malfunctions. But they noted that the helicopter was not equipped with a Terrain Awareness and Warning System (TAWS), a technology the NTSB has been urging for medevac helicopters since 2006.

The crash occurred early Sunday near Andrews Air Force Base. It killed the pilot, two emergency medical workers and one of the two auto accident victims the helicopter had been transporting to Prince George’s Hospital Center in Cheverly when the pilot attempted an emergency landing at Andrews. After the wreckage was discovered in Walker Mill Regional Park near the base, the state police grounded the other 11 helicopters in the fleet for inspections.

Maryland State Police spokesman Greg Shipley said yesterday that officials expect the aircraft to remain out of action for “days instead of weeks” while they make sure there are no systemic problems with the fleet.

“They are working to get them back in the air as quickly as possible,” Shipley said. In the interim, private helicopter operators and other agencies have been filling in to transport critically injured patients to trauma centers.

Shipley said three of the copters in the state police fleet are equipped with terrain-avoidance technology. He said the agency intends to require the systems – as well as other NTSB-recommended safety measures – in all of its helicopters as part of a plan to replace the existing fleet.

Ladd Sanger, a Dallas attorney and helicopter pilot who specializes in aviation litigation, said that terrain-awareness systems have been shown to be effective and can be retrofitted onto older copters.

At the crash site yesterday, officials with the NTSB, Federal Aviation Administration and the state police were scouring the wreckage in search of clues to what happened. About 20 people, including investigators and employees of the helicopter’s manufacturer, briefly halted their work as a photographer and videographer from the news media were shuttled to the site in a golf cart to capture images of the downed helicopter.

Deborah A.P. Hersman, a member of the NTSB, said the debris is contained within a 200-yard area inside Walker Mill Regional Park, adding that the helicopter’s main components are “accounted for, but heavily damaged,” indicating the aircraft did not encounter fire or an in-flight break-up.

Crews discovered cockpit instruments outside the aircraft that show the helicopter was en route to the Andrews runway, Hersman said. So far, a thorough investigation of the instrument landing system, which enables the pilot to land the aircraft, showed normal operations, she said.

Hersman said that emergency medical services missions are among the riskiest helicopter flights. She said the agency has investigated eight fatal EMS accidents in the past 12 months involving 31 deaths.

“We are very concerned about this segment of the industry, and that’s why we sent a whole team here,” Hersman said.

She would not say whether poor visibility and foggy weather were responsible for the crash, though she noted that conditions were better when the copter took off than when it crashed. She did say that for years, the NTSB has warned EMS flight operators to take full stock of weather conditions before flying.

“We would like to see TAWS installed on all EMS operations so they can have adequate clearance of obstacles and avoid terrain,” she said.

The dangers of EMS flights at night and in poor weather were pointed out in a 2006 study by the Center for Injury Research and Policy at the Johns Hopkins University Bloomberg School of Public Health. The study found that 56 percent of EMS helicopter crashes in darkness involved fatalities, compared with only 24 percent that occurred during the day.

The author of that study, Hopkins professor Susan P. Baker, said that in many cases it might be safer to take patients to hospitals via ground transportation.

“The fatal crash rate of ambulances is nothing like it is for helicopters,” she said.

The pilot, Stephen H. Bunker, 59, was among those who died in the crash. Also killed were Tfc. Mickey Lippy, 34, a flight paramedic from Westminster; Tonya Mallard, 38, an emergency medical technician from the Waldorf rescue squad; and Ashley J. Younger, 17, who had been a passenger in a car that crashed in her hometown of Waldorf about 10:45 p.m. Saturday.

Wells, the driver of that car, remained at Shock Trauma yesterday with broken bones and internal injuries, according to her parents.

“Every time we talk to the doctors it’s better news, so we’re happy,” her father, Scott Wells, told reporters outside the hospital. “But she’s a very hurt girl.”

The crash stunned Bunker’s fellow pilots, who also fly Eurocopter Dauphin 2 twin jet engine helicopters like the one that crashed.

The state police have 47 pilots, with most of them working in the medevac fleet. The pilots are paired with troopers who are trained paramedics, and the medevac fleet has had a reputation as an elite emergency response team that serves all corners of the state.

“We chose this type of helicopter flying because we want to help people,” said David Delisio, a civilian state police medevac pilot who is based in Frederick. “It’s a wonderful feeling when you complete a mission and take a person to the hospital. I can’t tell you how many times that person will call back, or their family will call and say, ‘Hey thanks a lot.’ “