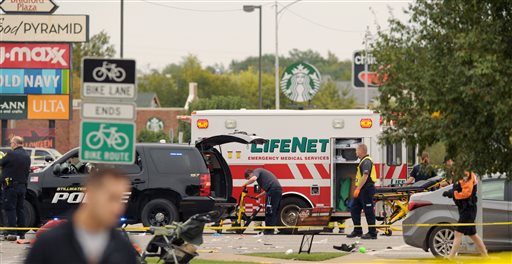 The faint melody of the Oklahoma State alma mater faded into the dark at the core of campus just after 8 p.m. Saturday.

On Library Lawn, illuminated by only the light shining through the windows of Edmon Low Library, nearly 100 people gathered at a student-led vigil to remember those killed and those fighting for their lives.

Students formed a circle around the remaining homecoming signs speckled with words boasting loyalty, tradition and community – words with meanings that had been continuously tested since 10:31 a.m.

Throngs of people proudly sporting orange gear packed the sidewalks surrounding the parade path. People in the parade passed out candy and waved with grins to those in the crowd. The Sea of Orange Parade, a decades-old tradition, was in full swing.

And then it wasn’t.

As the end of the entourage neared Hall of Fame Avenue and Main Street, a 2014 Hyundai Elantra burst through a barricade and smashed an unmanned police motorcycle before plunging into the crowd.

“I thought it was a bomb,” said Minjung Kwak, a multimedia journalism junior who was inches away from being struck by the vehicle.

People screamed. Some stood in shock, mouths agape. Others rushed to the aid of those on the ground, administering CPR and signaling first responders. Three bodies lay in the street surrounded by strewn glass and metal shards from the motorcycle.

Stillwater residents Marvin and Bonnie Stone, both 65, and University of Central Oklahoma student Nakita Prabhakar, 23, from Mumbai, India, were killed.

Sirens blared. People were corralled from the gruesome scene, the bodies covered with tarps.

“I saw one woman, she was crying so hard hugging her baby,” Kwak said. “I thought, ‘Maybe she’s as shocked as I am.’ But then people came to rescue, and I saw her crying even harder and people took her baby and I realized the baby was unconscious.”

“I’ve been here 29 years,” Gibbs said. “I can’t recall an incident of this magnitude.”

By Sunday evening, 46 people were listed as having been injured. More than half were treated and released.

Eleven of the injured were children.

The alleged driver of the vehicle, Adacia Avery Chambers, 25, from Stillwater, was arrested on a charge of driving under the influence and placed in Stillwater City Jail, police said. Chambers is not an OSU student, said Gary Shutt, OSU spokesman.

Chambers has no previous criminal record, according to Oklahoma Supreme Courts Network.

Chambers’ attorney, Tony Coleman, stood behind his desk in Oklahoma City in front of a flock of reporters and held a news conference Sunday afternoon. Coleman said he could “absolutely rule out” alcohol as a substance of impairment at the wheel.

He said Chambers’ behavior was not consistent with that of someone recovering from a “drunken stupor” when he met with her Saturday night.

He said he was “less than satisfied” with Chambers’ competency during his meeting with her and revealed she dealt with mental illness in the past.

“There’s a family history of it,” Coleman said. “There have been warning signs for quite some time.”

He said he will request a mental competency evaluation.

Laura Thomas, Payne County district attorney, said on Saturday that she asked the police to hold Chambers on at least three counts of manslaughter instead of any form of a driving under the influence charge.

“All the evidence, once reviewed, may affect the degree of charges,” Thomas said in an email. “Numerous search warrants are being executed and may provide us additional evidence.”

Stillwater police announced on Sunday that Chambers was being held in custody on additional charges of four counts of second-degree murder.

Thomas said Monday is the earliest charges can be filed. Chambers is scheduled to be arraigned at 1:30 p.m. on Monday at the Payne County Courthouse, she said.

After much deliberation, President Burns Hargis announced the football game against Kansas would be played in remembrance of those killed.

“The families, I know, (of) these victims will never be able to understand (the tragedy) and neither will we,” Hargis said at a news conference Saturday. “But the Cowboy family pulls together. Unfortunately, we’ve had to do it before, and we’ll do it again.”

Saturday’s tragic events overshadowed any monumental moves on the gridiron. Although the Cowboys won, it seemed trivial to celebrate the addition of another “W” to their record when so many in the community were hurting, physically and emotionally.

Oklahoma Gov. Mary Fallin spoke to the media at a news conference in Stillwater during halftime.

She said watching the droves of people walk to the stadium helped her put the situation in perspective.

“It was just a great remembrance that you never know that life can be fleeting really quickly,” Fallin said.

Lee Bird, vice president of OSU Student Affairs, said she spent the day consoling families at the Stillwater Medical Center and tending to their needs, observing the community selflessly unite.

“It just touches my heart that people think, ‘Oh, I bet the hospital could use bottled water; I’ll drop it off,'” she said. “This is a very caring community, and it just shows again and again. Every time (there’s a tragedy) there are people that come out that care about each other that are looking for people who need help and doing the right thing.”

Bird said she was manning a parking lot for United Way when she received the news about the crash. Her priority was to contact a group of counselors who know tragedy within the OSU community all too well.

“I called my counselors who have answered the call with plane crashes and everything else we’ve gone through since 2000,” Bird said.

She said she has come to know the OSU community as resilient, strong and caring.

She said area schools such as Langston University and the University of Oklahoma have offered their condolences to OSU.

“Oklahoma is really a rare breed of cat and a very caring community and when the chips are down, everybody shows up and is ready to help,” she said.

At the end of the day, four orange lights were left to float atop the iconic campus fountain, each light a solemn reminder of a life lost.
During the vigil, OSU students Briar Lostlen and Alex Hanson placed orange lights in the middle of Library Lawn in honor of the victims.

“It was more than just the four people,” Lostlen said. “There were thousands of people affected. Everyone at OSU, everyone at Stillwater.”