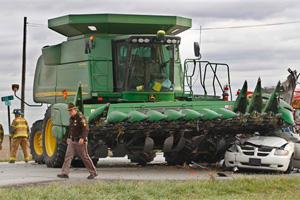 ODELL, Ind. (AP) – The driver of a combine that plowed into a minivan along a country road, killing a western Indiana couple and their teenage daughter, failed to stop the hulking machine at an intersection, police said Thursday.

Driver Carl McFarland, 36, did not bring the combine to a complete stop when he reached a stop sign posted at the intersection of Indiana 25 and a county road Wednesday evening, the Tippecanoe County Sheriff’s Office said.

As the machine entered the roadway, a minivan driven by 62-year-old Daniel Fox of Attica drove under a spiked harvesting apparatus known as a cornhead attached to the combine, flattening the minivan.

Fox was killed along with his 40-year-old wife, Stacy Fox, and their 15-year-old daughter, Demara Fox, in the crash about 10 miles southwest of Lafayette.

Police said the crash remained under investigation. No charges have been filed against McFarland, who was not injured in the crash.

The Tippecanoe County Sheriff’s Department told the Journal and Courier and The Indianapolis Star that the Foxes’ two other daughters, 17-year-old Demetria and 13-year-old Dakota Fox, survived the crash. Both were hospitalized at Riley Children’s Hospital in Indianapolis. Family friend 18-year-old Margaret Carpenter of Attica was being treated at a Lafayette hospital.

Clark Howey, a farmer who lives near the crash scene, aided the victims after hearing on his police scanner about the collision. He said McFarland worked for a longtime landowner. McFarland had just finished harvesting the corn in one field and was crossing the highway to get to another when the crash occurred, Howey said.

West Point Volunteer Fire Chief Gary Cheesman said it took rescuers 30 minutes to free the survivors from the minivan. By the time they were done, rescuers had to cut off the doors, rear hatch and roof of the vehicle to reach all the victims.