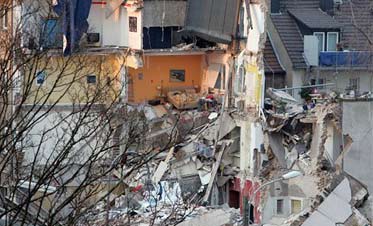 COLOGNE, Germany — Cologne’s six-story city archive building groaned then collapsed in a pile of rubble Tuesday as people inside fled in panic. All managed to escape safely but police said three people were feared missing in other damaged buildings nearby.

The archive building collapsed about 2 p.m., ripping open and dragging down parts of two adjacent buildings that contained apartments and an amusement arcade. A huge cloud of dust enveloped the site.

Parents at a nearby fast-food outlet grabbed their children and ran for their cars. “I heard a giant bang and then suddenly saw this giant gray dust cloud,” said Mustafa Goresme, 18, who watched from the restaurant. “It was like a Hollywood film.”

“Everyone was in a real panic,” said his friend, Mehmet Guerner. “We didn’t know what had happened.”

Alerted by rumbling sounds that preceded the collapse, all staff and visitors at the Cologne archive were able to get out in time without injuries, fire department director Stephan Neuhoff said.

Florian Hacke, who lives two buildings away, said he ran out of his house after he heard a creaking noise and cracks opened up in his ceiling.

Officials initially said nine people were feared missing in the neighboring buildings, but police later said all but three had turned up safe.

Neuhoff said rescuers needed to stabilize the area before moving into the rubble to determine whether anyone was trapped inside. Late Tuesday evening they pumped concrete into the ground around the area to firm it up.

There was no immediate word on the condition of the archive’s contents, but a regional government official, Lutz Lienenkaemper, promised help in salvaging them.

Cologne has archive material going back over centuries, including manuscripts by communist pioneers Karl Marx and Friedrich Engels and documents related to German writer Heinrich Boell.

Emergency workers evacuated buildings in a 150-yard (meter) radius. A nearby retirement home with 76 residents also was evacuated for fear that a crane could collapse on it.

It was not immediately clear what caused the archive building to collapse.

Work was being done on a new subway line under the street on which the building stood. The roof of the subway construction site also collapsed Tuesday, but officials said they did not believe anyone was trapped in there.

Subway project leader Rolf Papst also said there had been no major tunneling work done in the last 30 days.

“I am not aware of any work at the moment that might have caused this,” said Gudrun Meyer, a spokeswoman for the subway company.

The modern-style building opened in 1971. A longtime archive employee, Eberhard Illner, told a German radio station that he had noticed and reported cracks in the basement last year.

However, Neuhoff said initial indications were that those cracks had no link to the collapse.

In 2004, the tower of a nearby church leaned about 3 feet (1 meter) to one side, an incident blamed on underground construction work.