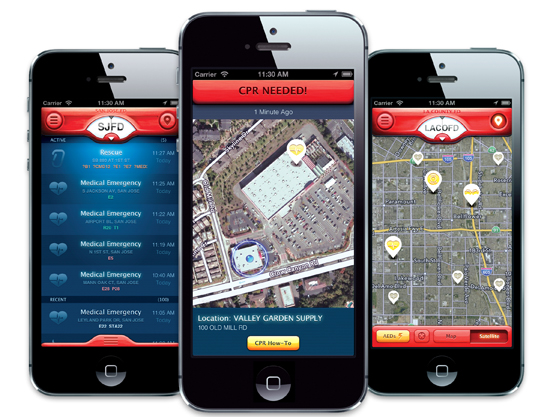 App’t Bystander Response
On March 27, Heather Roms had just left a dentist’s office in Wilsonville, Ore., when she received a notification on her smartphone that someone nearby needed CPR. The alert came from the PulsePoint mobile application, an app developed by the PulsePoint Foundation, promoted by Physio-Control and introduced to the area by Tualatin Valley Fire & Rescue (TVFR).

“I was literally a block away,” Roms explained in a video interview with TVFR. “I wouldn’t have been able to see that there was a need without [the app].”

When a cardiac arrest event occurs in a public place and is called in, the PulsePoint app alerts CPR-trained subscribers close to the incident at the same time TVFR’s team is notified and dispatched to the scene. The app uses location-based services linked through the CAD system to provide the subscriber with the address of the event and a map of its location. It also pinpoints the position of the nearest public access AED.

Roms, a registered nurse in the Labor & Delivery Department at Legacy Emanuel Medical Center in Portland, Ore., first heard about the app from her mother who works at a middle school in the area. On Mar. 27, Heather was one of three subscribers who received the alert. By responding to the incident, she became the first citizen in Oregon to respond to a PulsePoint notification.

“The more people who knew CPR or who had skills in that way and who felt comfortable responding to emergencies could really do a great service,” Roms told TVFR. “I know people have trepidation, worried that it might go off, but, on the flip side, you would want somebody with the skills and the ability to respond.”

We applaud Tualatin Valley Fire & Rescue for being the first fire department in Oregon to deploy the app and to Roms for downloading the app and responding to its notification. Kudos, too, to the PulsePoint Foundation and Physio-Control for partnering to expand the use of the lifesaving mobile application.

Watch for a detailed supplement on how Data Drives Care in January JEMS.

AEDs On Patrol
For years, financial constraints prevented the Kill Devil Hills Police Department (KDHPD), a city in Dare County, N.C., from outfitting all patrol units with AEDs. However, in Jan. 2013, Captain Mark Evans successfully lobbied his chief to equip two patrol cars with AEDs. That action soon paid off.

One of the defibrillators purchased was installed in Evans’ patrol car which proved to be a good thing on May 28, when Evans was the first to arrive at a SAGA Construction site where a construction supervisor had gone into cardiac arrest. Evans shocked the victim three times, then provided chest compressions until the fire department and EMS arrived.

“I was able to restart the victim’s heart and he was stabilized and airlifted to a hospital,” says Evans. “He suffered no long-lasting health effects and was released in five days with not even a stint or bypass.”

News reached Sumit Gupta, one of SAGA’s principal partners. After learning that AEDs weren’t available in all of KDHPD’s patrol units, SAGA raised $12,500 to equip them all with defibrillators. Then, on Aug. 1, the company created the SAGA Community Fund. One of its first goals? Raise enough money to equip every patrol car in Dare County’s six other police departments with the lifesaving device.

We give a big thumbs up to the police department in Kill Devil Hills for initially outfitting two patrol cruisers with defibrillators and to SAGA Construction for their AED fundraising efforts.

In August and September, paramedics in two different states were accused of stealing injectable pain medications from their rigs.

Joey Reed Dahl, 45, was arrested in Union County, N.C., in August for allegedly injecting himself with painkillers– morphine, Dilaudid, fentanyl and Versed–while working as an EMT for the Union County EMS Unit. He would then replace the empty vials with saline solution. After being charged with four felony counts, Dahl resigned from the hospital and surrendered his paramedic certification.

In another unrelated instance, Michael Keener, a firefighter and part-time paramedic in Shreveport, La., allegedly tampered with medications while working as an EMT for the North Caddo Medical Center in Vivian, La. According to investigators, Keener allegedly removed the drugs from the vials, refilled them with saline, and then put them back into paramedic kits.

Upon turning himself in to the Caddo Correctional Facility on Sept. 11, the 26-year-old was charged with illegally obtaining a controlled dangerous substance and with altering a controlled dangerous substance. Just prior to the drug-tampering investigation, Keener was also accused of stealing narcotics from the Shreveport Fire Department during his stint as a Shreveport firefighter and also charged on two counts in that case.

We give a big thumbs down to these EMS providers for stealing from hospitals and tarnishing the trustworthiness of first reponders. We are thankful no patients were adversely affected by the switched substances.