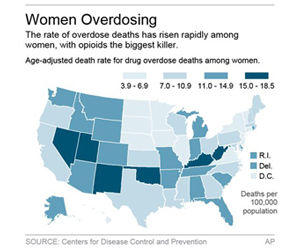 ATLANTA (AP) – Overdose deaths in the U.S. are rising fastest among middle-aged women, and their drug of choice is usually prescription painkillers, the government reported Tuesday.

“Mothers, wives, sisters and daughters are dying at rates that we have never seen before,” said Dr. Thomas Frieden, director of the Centers for Disease Control and Prevention, which compiled the data.

The female overdose problem is one of the few health issues the CDC is working on that are clearly getting worse, he added.

For many decades, the overwhelming majority of U.S. overdose deaths were men killed by heroin or cocaine. But by 2010, 40 percent were women – most of them middle-aged women who took prescription painkillers.

Skyrocketing female overdose death rates are closely tied to a boom in the overall use of prescribed painkillers. The new report is the CDC’s first to spotlight how the death trend has been more dramatic among women.

The CDC found that the number and rate of female prescription drug overdose deaths increased about fivefold 1999 to 2010. Among men, overdose deaths rose about 3½ times.

Overall, more men still die from overdoses of painkillers and other drugs; there were about 23,000 such deaths in 2010, compared with about 15,300 for women. Men tend to take more risks with drugs than women, and often are more prone to the kind of workplace injuries that lead to their being prescribed painkillers in the first place, experts say.

But the gap has been narrowing dramatically.

Studies suggest that women are more likely to have chronic pain, to be prescribed higher doses, and to use pain drugs longer than men. Some research suggests women may be more likely than men to “doctor shop” and get pain pills from several physicians, CDC officials said.

But many doctors may not recognize these facts about women, said John Eadie, director of a Brandeis University program that tracks prescription-drug monitoring efforts across the United States.

The report highlights the need for “a mindset change” by doctors, who have traditionally thought of drug abuse as a men’s problem, he said. That means doctors should consider the possibility of addiction in female patients, think of alternative treatments for chronic pain, and consult state drug monitoring programs to find out if a patient has a worrisome history with painkillers.

The CDC report focuses on prescription opioids like Vicodin and OxyContin and their generic forms, methadone, and a powerful newer drug called Opana, or oxymorphone.

“These are dangerous medications and they should be reserved for situations like severe cancer pain,” Frieden said. He added that there has been no documented increase in pain in the U.S. public that would explain the boom in painkiller prescriptions in the last 10 or 15 years.

Some experts said the increase in prescriptions can be traced to pharmaceutical marketing campaigns.

CDC researchers reviewed death certificates, which are sometimes incomplete. In only a fraction of cases were specific drugs identified. Sometimes a combination of drugs was involved in deaths, like painkillers taken with tranquilizers.

It was not always clear which deaths were accidental overdoses and which were suicides. But CDC officials think more than 70 percent were unintentional.

One striking finding: The greatest increases in drug overdose deaths were in women ages 45 through 64.

It’s an age group in which more women are dealing with chronic pain and seeking help for it, some experts suggested.

Many of these women probably were introduced to painkillers through a doctor’s prescriptions for real pain, such as persistent aches in the lower back or other parts of the body. Then some no doubt became addicted, said Dr. Andrew Kolodny, a psychiatrist who specializes in addiction at Maimonides Medical Center in New York City.