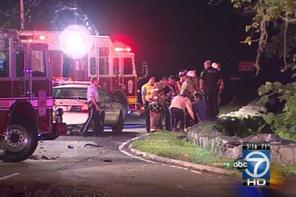 ARLINGTON, Va. (WJLA) – A woman was rescued after a multi-car accident sent her car over a cliff and into the Potomac River in Arlington.

It happened on the George Washington Parkway around 1 a.m. Wednesday near the Spout Run Parkway.

U.S. Park Police say a car involved in an accident left the road, then fell 200 feet into the river.

The driver suffered minor injuries. No other injuries were reported.

The parkway was shut down, but has since reopened.

There’s no word on what caused the crash.