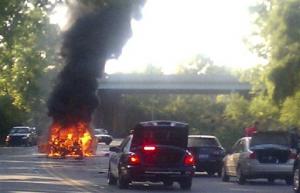 MONROE, Mich. (AP) – A car bomb caused a powerful explosion on a street in southeastern Michigan, seriously injuring a lawyer and his two sons, who are “very fortunate” to have survived an attack that turned their vehicle into a blackened hunk of metal, officials said Wednesday.

Investigators were poring over what remained of the vehicle after the Tuesday evening blast, looking for clues about how the bomb was made and who might have planted it, said Donald Dawkins, a spokesman for the Bureau of Alcohol, Tobacco, Firearms and Explosives.

“There was a lot of power behind it. The victims are very fortunate, very blessed, to be alive,” Dawkins said.

Investigators were trying to determine if the victims were targeted or whether the attack was random. The driver was attorney Erik Chappell, according to a law enforcement official who is familiar with the investigation but who requested anonymity because he was not authorized to speak publicly.

The vehicle exploded on a tree-lined street that runs under Interstate 75 in Monroe, about 35 miles southwest of Detroit. Authorities declined to talk much about the victims but said they were in serious condition at St. Vincent Medical Center in Toledo, Ohio, just over the Michigan border.

The attack was a “heinous crime,” Dawkins said. “When you have children involved, it really hits home.”

Chappell, 42, lives nearby in LaSalle Township in a comfortable neighborhood on Lake Erie. He works for a Sylvania, Ohio-based law firm that bears his name and has an office in Monroe. The firm declined to comment.

No one answered the door at the Chappell home mid-afternoon Wednesday. Michael Davison, 61, a retired sheriff’s lieutenant who lives a few doors away, said the family hosts a popular party on the Fourth of July.

“They always put on a big fireworks display,” Davison said.

He said Chappell regularly is outside playing with his three kids and also coaches football in the local Catholic youth league.

In Monroe, Shawn Remington, 33, said he was working outside his home when he heard what sounded like a heavy, metal Dumpster lid being slammed shut and then saw a big column of smoke Tuesday.

He said when he got to the scene, firefighters were extinguishing the blaze and rescue workers were loading the victims into ambulances. He said the vehicle was “totally melted.”

“By the time I got there, there was nothing left of the vehicle,” he said. “It was down to bare metal.”

Monroe is a city of more than 20,000 that is one of Michigan’s oldest communities. It has a historic downtown and is home to furniture maker La-Z-Boy Inc.

The ATF has offered a reward of up to $10,000 for information that leads to an arrest