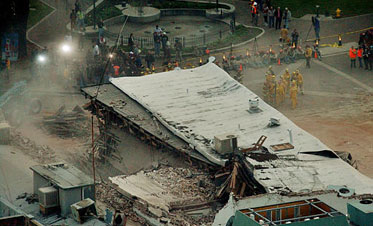 LOS ANGELES — Some 5 million Californians promise to drop to the ground, cover their heads and hold onto furniture Thursday as if an earthquake had just struck.

Don’t worry, it’s not real. But because earthquakes are a big threat to California, the state is starring in a mock quake disaster drill billed as the largest in U.S. history.

The exercise is based on a hypothetical magnitude-7.8 temblor that ruptures the southern San Andreas Fault an event scientists call the “Big One.” Such a quake would cause 1,800 deaths and $200 billion in damage, researchers estimate.

The state’s previous simulated quake catastrophes were smaller in scale, with the leading actors mainly first responders and cities testing their emergency preparedness. The drill Thursday is more of an ensemble cast, with governments, schools, hospitals, churches, businesses and residents promising to do their part.

California is the most seismically active state in the Lower 48. Earlier this year, the USGS calculated that the state faces a 46 percent chance of being hit by a magnitude- 7.5 or larger quake in the next 30 years, with the epicenter likely in Southern California.

Despite the known seismic risks, California has never been as organized as Japan, which holds an annual quake drill to mark the 1923 Great Kanto earthquake, a magnitude-8.3 temblor in Tokyo that killed more than 140,000 people.

Interest in the statewide exercise was initially low but spiked after a moderate quake jolted the state this summer, Jones said.

Though a far cry from the “Big One,” the July magnitude-5.4 temblor centered in the hills east of Los Angeles and was the strongest to rattle a populated area of Southern California since the 1994 Northridge disaster. After the shaking stopped, 400 people signed up for the drill, Jones said.

If such a quake hit, scientists say, sections of freeways would collapse, water and gas pipes would burst and certain high-rise buildings and older structures would fall.

Scientists estimate it cost $2 million to organize and publicize the drill.

Most participants are being asked to dive for safety at 10 a.m. PST, the start of the drill. Other participants are staging full-scale exercises complete with search-and-rescue missions and medical triaging of people posing as casualty victims.

It’s not all doom and gloom. Scientists plan to follow up the drill with a Get Ready Rally in downtown Los Angeles on Friday, featuring earthquake preparedness information, presentations by state and city government leaders, vendors and live entertainment.