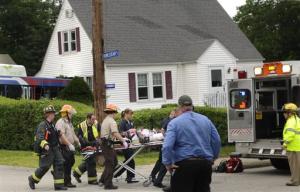 Fire Capt. Eric Otterson said the driver of the Worcester Regional Transit Authority Bus, who was trapped for more than an hour after the 5 p.m. crash, was seriously hurt. He was taken to a hospital.

Otterson said three children and an adult were inside the Swanson Road house when the bus knocked it off its foundation by 7 to 10 feet, and had minor cuts and scrapes. He said two bus passengers had moderate scrapes. They were taken to hospitals for treatment and evaluation.

Chris Erickson, 32, who lives in the house with his wife and their three sons ages 14, 11 and 6, told The Associated Press he was at work when the bus struck their kitchen. He said two of the boys were in the nearby living room.

“They were pretty shook up,” Erickson said, but weren’t seriously hurt, and the family’s pets weren’t injured. “I just hope we can get the photo albums and the clothes out that we need.”

Police Chief Andrew Sluckis told the Worcester Telegram & Gazette the driver may have had a medical episode or a problem with the brakes. Sluckis said the bus was headed toward a local shopping mall when it suddenly ran off the street, cut across a yard and hit the house.

Thomas Mosley, who lives across the street, said he heard a loud bump and went to help. He said it appeared the bus had run across the lawn of a nearby dentist’s office before plowing through the Ericksons’ lawn and a hedge into their house. The bus landed upright.

Erickson’s father, Lenny Erickson, 64, owns the house his father built it in 1949. He said he’s relieved his family members weren’t seriously hurt, but is saddened by the damage to the home where he grew up with his parents and two brothers.

The bus was removed from the white Cape Cod style house Monday night after the structure was shored up.

“That’s the old homestead, and now they are saying they will have to tear it down,” Lenny Erickson said. “It was a great place to grow up.”