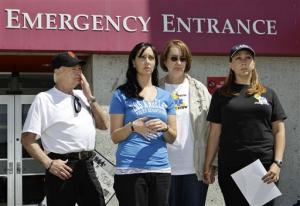 SAN FRANCISCO (AP) – A San Francisco Giants fan severely beaten outside Dodger Stadium has made “significant improvement” despite a series of ups and downs since his near-fatal attack more than four months ago, his doctor said Monday.

Bryan Stow is awake, breathing on his own, can move slightly and has been able to interact with his family, said Dr. Geoff Manley, the chief of neurosurgery at San Francisco General Hospital. However, Manley said it’s still unclear how far Stow’s recovery will take him.

“His ability to follow commands has greatly increased,” Manley said. “There have been a lot of ups and downs and we still don’t know where he’s going to plateau in terms of his recovery.”

The paramedic from Santa Cruz remains in serious condition after suffering a traumatic brain injury when he was attacked on March 31 following the Dodgers’ home opener against the Giants in Los Angeles. He underwent a life-saving procedure in Los Angeles and was put in a coma for several weeks.

He was transported to San Francisco to be closer to his family in May.

Last week, Stow’s family said on their website that he is responding to some directions. Stow lifted his left leg when asked and raised his left arm when asked if someone could hold his hand, relatives said.

The family also said that when Stow’s sister, Bonnie, asked if she could give him a kiss, he puckered his lips each time.

Last month, doctors performed emergency surgery on the father of two to remove fluid buildup in his head that caused a seizure. But Stow has responded well following surgery last week to replace a missing skull fragment with a prosthetic bone flap, Manley said.

Doctors will determine in the next week or so whether Stow will require a shunt to permanently divert the fluid, Manley added.

The goal, Manley said, is to place Stow in a long-term rehab center. The doctor said Stow has come far in terms of nearly being beaten to death; being placed in a coma, opening his eyes and now following some basic commands.

“In the spectrum of things, he’s not running down the hall and doing multi-step commands, but given where he was when he first came here, he’s significantly improved,” Manley said. “He still has a long way to go.”