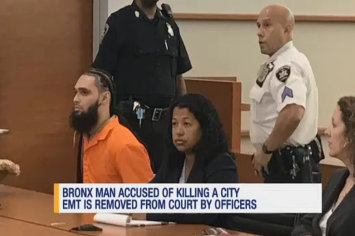 THE BRONX, N.Y. — A man accused of fatally running over an EMT in the Bronx nearly three years ago had an outburst in court yesterday, according to reports.

Jose Gonzales demanded a new lawyer and said he was forced by his attorney to plead guilty. Gonzalez became angry when the judge denied his request, News 12 The Bronx reported.

He was taken out of court and at one point reportedly screamed “I’ll kill you” toward his lawyer.

Gonzales is accused of running over EMT Yadira Arroyo back in March 2017 with her own ambulance.

Arroyo’s family believes Gonzales is trying to stall the trial.