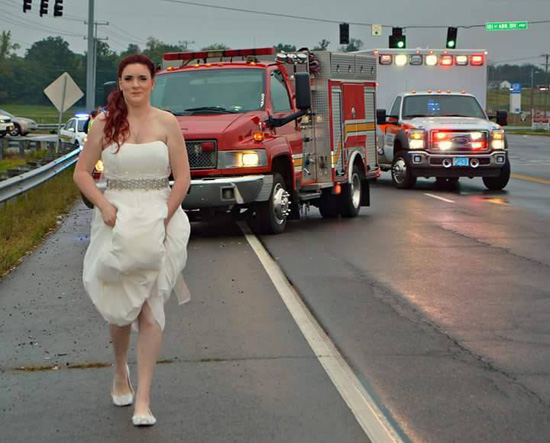 FROM WEDDING BELLS TO SIRENS

Couples can spend years planning their wedding, knowing to “expect the unexpected.” But paramedic Sarah Ray of Tennessee never anticipated having to save family members from a car crash, all while still in her gown.

While en route to the reception, Ray’s grandparents and father were involved in a crash, totaling their car. When she heard the news, Ray’s instincts kicked in. She and her newly pronounced husband (also a paramedic) drove straight to the crash instead of their party. Ray hopped aboard the responding ambulance to help care for her grandmother who was inside with minor injuries. The EMS crew assured Ray her grandmother would be OK and took her to a local hospital. A photo of the incident snapped by the bride’s mother has gone viral, with Ray holding up her gown while walking away from the ambulance.

Ray has been modest about her actions, telling USA Today that it’s simply the job she does every day at Montgomery County (Tenn.) EMS, and that any other paramedic would do the same.

Dealing with death is an unfortunate part of the job for EMTs and paramedics. Although it might seem morbid to outsiders, it can become a routine event to see patients who don’t survive.

But some hospital workers are trying to put reverence back into the loss of life. It started at the University of Virginia (UVA) Medical Center in Charlottesville two years ago, when one doctor took the time to pray after a patient died. Since then, the prayer has evolved into a nonreligious practice known as “the Pause.” Taking a moment of silence after a patient flatlines helps doctors and nurses recognize that a person, not just a patient, has passed and what the emotional ramifications will be for that person’s family and loved ones. It also presents an opportunity for hospital workers to thank one another for their hard work and to know that they did everything they could to save that person.

The Pause is now being taught to students at the UVA nursing school, promising that the future of medical work will be done in a respectful, empathetic manner.

We give a thumbs up to UVA for incorporating this effective means of handling potentially emotional cases into their curriculum. JEMS makes a concerted effort to report on ways medics can handle tough cases to help avoid them having an impact on their mental health, and this is an inspiring solution. We hope the Pause continues to spread its powerful effect around the globe.

It can feel limiting working in an ambulance at times; we sometimes rely on the hospital for its equipment and larger staff. EMS coordinator and educator Rom Duckworth, however, is empowering first responders to identify and treat serious health issues on site, specifically lifethreatening sepsis.

Duckworth has created a program to train prehospital providers on recognizing and treating adult and pediatric sepsis. “Previously, EMS providers believed that sepsis was a slow-moving disease process that can only be identified and dealt with in the hospital,” Duckworth explains. “Our understanding of sepsis, how to treat it and what a priority it is, has grown a great deal in recent years. I believe that it’s critical for EMS providers to understand that they can make an important difference and to know what they can do to help.”

As part of Sepsis Awareness Month, Duckworth was declared a 2015 sepsis hero by the Sepsis Alliance. The gala, now in its fifth year, aims to “celebrate champions of sepsis awareness” and bring together “sepsis survivors, family members, patient advocates, healthcare professionals, policy makers and members of industry who have been instrumental in raising sepsis awareness.”

We give a thumbs up to Duckworth for his potentially lifesaving work and passion for much-needed EMS education. Tackling an often misunderstood topic is crucial for EMS providers and other healthcare professional to deliver the best care possible to their community. 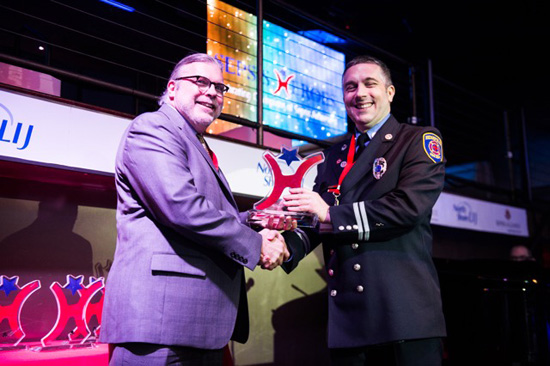 Firefighter Medics Treat Their Own in Boston Fire

0
Four people, including at least three firefighters, were taken to hospitals.