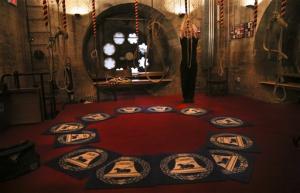 NEWTOWN, Conn. (AP) – The chiming of bells reverberated throughout Newtown on Friday, commemorating one week since the crackle of gunfire in a schoolhouse killed 20 children and six adults in a massacre that has shaken the community – and the nation – to its core.

Gov. Dannel P. Malloy gathered with other officials in rain and wind on the steps of the Edmond Town Hall as the bell rang 26 times in memory of each life lost at Sandy Hook Elementary School. The gunman also killed his mother before the massacre, and himself afterward.

Though the massacre does not rank as the deadliest school shooting in U.S. history – that happened at Virginia Tech – the tender age of the victims and the absence of any apparent motive has struck at Americans’ hearts and minds. The gunman used a military-style assault rifle loaded with ammunition intended to inflict maximum damage, officials have said.

Just a week after the attack, gun control has taken a front burner in Congress, where previous mass shootings produced only minimal legislative reaction. Vice President Joe Biden said Thursday that the Obama administration would push to tighten gun laws.

The National Rifle Association, at its first public event since the shootings, called Friday for armed police officers to be posted in American school to stop the next killer “waiting in the wings.”

Wayne LaPierre, CEO of the nation’s largest gun-rights lobby with 4.3 million members, said at the Washington news conference that, “The only thing that stops a bad guy with a gun is a good guy with a gun.”

He blamed video games, movies and music videos for exposing children to a violent culture.

Though security was tight, the briefing was interrupted twice by people holding up signs that blamed the NRA for killing children. The protesters were taken from the room.

Traffic stopped in the streets outside the town hall in Newtown as bells rang out to honor the dead.

Malloy, taking deep breaths with his hands folded in front of him, was joined by the Newtown superintendent of schools, lawmakers and other officials as bells rang out at the nearby Trinity Episcopal Church.

Firefighters bowed their heads around a memorial filled with teddy bears, other stuffed animals and a New York Giants pillow. Some hugged and onlookers shook their hands afterward.

“When I heard the 26 bells ring it just melted my soul,” said Kerrie Glassman, of Sandy Hook, who said she knew seven of the victims. “It’s just overwhelming. You just can’t believe this happened in our town.”

“Everybody wants to do something,” she said. “It shook that false sense of security that we had. This is my backyard.”

Chip Carpenter, a volunteer with the police and fire department, said he was upset to see the wind knocking down tents for memorials.

“I was so distraught this morning,” he said. “I just cried for the longest time. Just seeing everything falling apart. We suffered enough here.”

Among those who gathered in Newtown was a group of 13 survivors of the 2005 school shooting on the Red Lake Indian Reservation in Minnesota. The group drove nearly 1,500 miles to support and comfort the families and survivors. They brought gifts intended to bring a message of resilience and hope, including a plague that survivors of the 1999 Columbine shooting gave to them after their experience.

“This is just something we had to do,” said Ashley Lejeunesse, 23, who was also in the Red Lake classroom.

The chiming of bells reverberated throughout the nation.

In Washington, religious leaders from a broad range of faiths gathered at Washington National Cathedral to call for their congregations to lobby Congress to enact gun control and mental health reforms to address pervasive gun violence. In a garden beside the National Cathedral, they paused to listen as a funeral bell tolled.

In New York City, bells at the historic Trinity Church near the World Trade Center tolled 28 times. In Massachusetts, bells in churches around the state, including Boston’s historic Old North Church, rang in honor of those killed in the attack. A moment of silence was observed throughout Colorado, and bells rang out in Denver.

When the bells tolled mournfully to honor the victims of last week’s shooting rampage, they did so 26 times, for each child and staff member killed.

There is rarely a mention by residents of the first person police said Adam Lanza killed that morning: his mother, Nancy, who was shot in the head four times while she lay in bed.

A private funeral was held Thursday in New Hampshire for Nancy Lanza, according to Donald Briggs, the police chief in Kingston, N.H., where her funeral was held. About 25 family members attended the ceremony.

Newtown and environs weathered a fourth day of funerals Thursday, and five more funerals or memorials were scheduled for Friday.

The Obama administration’s response to last week’s shooting is being overseen by the vice president. He said he and the president are “absolutely committed” to curbing gun violence.

Gun-control measures have faced fierce resistance in Congress for years, but that may be changing because of the events in Connecticut, which shocked the nation.

After the shooting, Obama signaled for the first time that he’s willing to spend significant political capital on the issue. Some prominent gun-rights advocates on Capitol Hill – Democrats and Republicans – have expressed willingness to consider new measures.

Investigators have said that Nancy Lanza, a gun enthusiast, visited shooting ranges several times and that her son also visited an area range.

Authorities say Adam Lanza shot his mother at their home and then took her car and some of her guns to the school, where he broke in and opened fire. A Connecticut official said Nancy Lanza was shot four times in the head with a .22-caliber rifle.

Adam Lanza was wearing all black, with an olive-drab utility vest, during the school attack. Investigators have found no letters or diaries that could explain the rampage.

Friends and acquaintances have described him as intelligent, but odd and quiet.

Friends said he would stare down at the floor and not speak when she brought him into a local pizzeria. They knew that he’d switched schools more than once and that she’d tried home schooling him. But while she occasionally expressed concern about his future during evenings at the bar, she never complained.