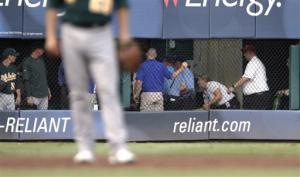 ARLINGTON, Texas (AP) – A Texas Rangers fan died after falling about 20 feet onto concrete reaching out for a baseball tossed his way by All-Star outfielder Josh Hamilton during a game.

Stone was a lieutenant and had been with the Brownwood Fire Department nearly 18 years, said City Manager Bobby Rountree. Brownwood is about 150 miles southwest of Arlington.

Stone was at the game with his young son, who watched as his dad tumbled over the outfield railing after catching the ball.

Arlington Fire Department officials said Stone, who witnesses said was conscious after the fall, “went into full arrest” while being transported by ambulance. He was pronounced dead at a Fort Worth hospital less than an hour after he fell.

“We had a very tragic accident tonight and one of our fans lost their life reaching over the rail trying to get a ball,” team president Nolan Ryan said somberly after the Rangers’ 6-0 victory over Oakland. “As an organization, and as our team members and our staff, we’re very heavy-hearted about this, and our thoughts and prayers go out to the family.”

Ronnie Hargis was sitting next to Stone in the first row of seats in left field. The men had been talking before the accident. Hargis reached out to try to grab Stone, who fell headfirst through a gap of several feet that is between the seats and the 14-foot-high outfield wall.

“He went straight down. I tried to grab him, but I couldn’t,” Hargis said. “I tried to slow him down a little bit.”

The area where Stone landed was out of sight from the field.

It is the second fatal fall at a major league stadium this season. In May, a 27-year-old man died after he fell about 20 feet and struck his head on concrete during a Colorado Rockies game. Witnesses told police that the man had been trying to slide down a staircase railing at Coors Field and lost his balance during a game against Arizona.

There was an audible gasp in the stands at Rangers Ballpark when Stone tumbled over the rail, eerily similar to an accident there almost exactly a year earlier. Another firefighter fell about 30 feet from the second-deck of seats down the right-field line while trying to catch a foul ball on July 6, 2010.

Tyler Morris, a firefighter from the Lake Cities Fire Department near Dallas, sustained a fractured skull and sprained ankle last year when he dropped onto seats where other fans were sitting.

The latest accident happened in the second inning after Oakland’s Conor Jackson hit a foul ball that ricocheted into left field. Hamilton, the reigning AL MVP elected by fans to start his fourth consecutive All-Star game next week, retrieved the ball and tossed it into the stands as players routinely do.

Safawna Dunn, who was sitting nearby, said Stone was calling for Hamilton to throw him the ball. Dunn said the victim was conscious when he was taken away on a stretcher.

Ryan described Hamilton as being “very distraught over this, as the entire team is.”

The Rangers’ clubhouse was closed to reporters after the game.

Rangers starter Derek Holland, who pitched a four-hit shutout, turned and glanced briefly at people looking down where Stone had land behind the outfield wall that supports a video board for replays and scores. Catcher Mike Napoli had motioned toward the outfield and Jackson looked that way as well before play resumed.

Between innings, Rangers manager Ron Washington spoke briefly with one of the umpires. Texas designated hitter Michael Young could be seen talking to A’s catcher Kurt Suzuki and pointing toward where last year’s fall happened.

Oakland reliever Brad Ziegler was in the visitor’s bullpen in left-center field, which can be accessed through the area where Stone fell.

Ziegler was in tears after the game when he found out about the death. The pitcher said when Stone was put on a stretcher, he told people tending to him that his son was “up there by himself” and asked them to check on the boy.

“He had his arms swinging. He talked and was conscious. We assumed he was OK,” Ziegler said. “But when you find out he’s not, it’s just tough.”

Former President George W. Bush, who used to be the team’s managing general partner and often attends games, was sitting in the front row with Ryan near the Texas dugout when the accident happened. Ryan left moments later while Bush remained in the seats.

Ryan said Bush was aware of what was happening.

“It’s just devastating. I don’t even know what to say. Our thoughts and prayers are with the family,” A’s manager Bob Melvin said. “It filtered into our dugout. … I made a little announcement to the team after the game. Certainly baseball is not very important in light of something like that.”

After Morris was hurt last year, he called the incident a “100 percent, total accident that could have happened to anybody.” He said he didn’t blame the Rangers or the ballpark.

In 1994, a Plano woman posing for a picture after the Rangers’ first game in the stadium sustained multiple injuries after she fell about 35 feet.

Ryan wasn’t prepared to talk about what changes, if any, might be made at the stadium.

“Tonight, we’re not prepared to speak about anything further than the accident and the tragedy,” Ryan said. “That’s where I’m going to leave it.”