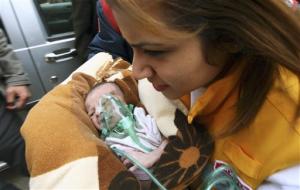 ERCIS, Turkey (AP) – A 2-week-old baby girl, her mother and grandmother were pulled alive from the rubble of an apartment building on Tuesday in a dramatic rescue, 48 hours after a 7.2-magnitude earthquake toppled some 2,000 buildings in eastern Turkey.

Television footage showed rescuers in orange jumpsuits applauding as the baby, Azra Karaduman, was removed from the hulk of crushed concrete and metal. A rescuer cradled the naked infant, who was wrapped in a blanket and handed over to a medic amid a scrum of emergency workers and media. The state-run Anatolia news agency said the baby was in good health but was flown to a hospital in Ankara.

Authorities said the death toll had risen to 370 as rescuers in Ercis and the provincial capital, Van, raced against time to free dozens of people trapped inside mounds of concrete, twisted steel and construction debris. At least nine people were rescued on Tuesday, although many more bodies were discovered.

Authorities have warned survivors not to enter damaged buildings and thousands spent a second night outdoors in cars or tents in near-freezing conditions, afraid to return to their homes. Some 1,300 people were injured

The baby’s mother, Semiha, and grandmother, Gulsaadet, were huddled together, with the baby clinging to her mother’s shoulder when rescuers found them, emergency worker Kadir Direk said. There was a bakery at the ground floor of the building, which may have kept them warm, he said.

Hours after the infant was freed, the others were pulled from the half-flattened building and rushed to ambulances as onlookers clapped and cheered. The mother had been semiconscious, but woke up when rescuers arrived, Direk said.

“Bringing them out is such happiness. I wouldn’t be happier if they gave me tons of money,” said rescuer Oytun Gulpinar.

Workers could not find the baby’s father and there were no other signs of life in the shattered building, he said.

The Hurriyet newspaper reported the family live in Sivas, central Turkey, but were visiting the girl’s grandmother and grandfather.

Firefighters and rescuers ordered silence while they listened for noise from other possible survivors in the large 5-story apartment block, parts of which were being supported by a crane.

Nine-year-old Oguz Isler was rescued along with his sister and cousin, but on Tuesday he was waiting at the foot of the same pile of debris that was his aunt’s apartment block for news of his parents and of other relatives who remain buried inside.

Turkish rescue workers in bright orange overalls and Azerbaijani military rescuers in camouflage uniforms searched through the debris, using excavators, picks and shovels to look for Oguz’s mother and father and other relatives still inside.

Dogs sniffed for possible survivors in gaps that opened up as their work progressed.

“They should send more people,” Oguz said as he and other family members watched the rescuers. An elder cousin comforted him.

Mehmet Ali Hekimoglu, a medic, said the dogs indicated that there were three or four people inside the building, but it was not known if they were alive.

The boy, his sister and a cousin were trapped in the building’s third-floor stairway as they tried to escape when the quake hit. A steel door fell over him.

“I fell on the ground face down. When I tried to move my head, it hit the door,” he said. “I tried to get out and was able to open a gap with my fists in the wall but could not move my body further. The wall crumbled quickly when I hit it.”

“They took me out last because I was in good shape and the door was protecting me. I was hearing stones falling on it,” the boy said.

The government’s response to the quake appeared to be well-coordinated because of the country’s vast experience in dealing with killer quakes and their aftermaths. Hundreds of rescue teams from throughout Turkey rushed to the mainly Kurdish area, while Turkish Red Crescent dispatched tents and blankets and set up soup kitchens.

But there was still no power or running water and aid distribution was at times disrupted as desperate people stopped trucks even before they entered Ercis, leading some residents to complain that they could not get tents and stoves for their families. The Milliyet newspaper on Tuesday reported fistfights in front of some aid trucks.

“The aid is coming in but we’re not getting it. We need more police, soldiers,” resident Baran Gungor said. “People from nearby towns and villages stop the aid trucks on the road and loot tents and stoves.”

Hundreds of tents were erected in two stadiums but many preferred to stay close to their homes for news of the missing or to keep watch on damaged buildings.

The government said it would set up temporary homes and would begin planning to rebuild destroyed areas with better housing. Turks across the country began sending blankets and warm clothing.

The earthquake’s epicenter was the village of Tabanli but damage there was minimal; No deaths were reported and its mud-brick homes were relatively unharmed.

Turkey lies in one of the world’s most active seismic zones and is crossed by numerous fault lines. In 1999, two earthquakes with a magnitude of more than 7 struck northwestern Turkey, killing about 18,000 people.

Istanbul, the country’s largest city with more than 12 million people, lies in northwestern Turkey near a major fault line, and experts say tens of thousands could be killed if a major quake struck there.

Associated Press writers Suzan Fraser in Ankara, and Christopher Torchia in Istanbul, contributed to this report.