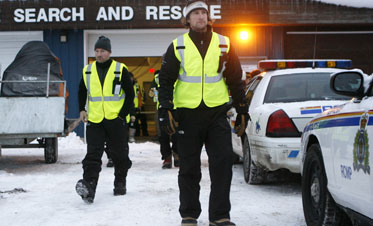 DENVER — An unusual winter snowfall has triggered a series of avalanches in the high mountains that has killed nine people in the U.S. and six members of a snowmobiling group in British Columbia in the last two weeks.

Two other Canadians from the same small-town group are presumed dead. With increasingly treacherous conditions, Canadian avalanche forecasters warned skiers and snowmobilers that it was too risky to use the backcountry for the next several days.

In Wyoming, the Jackson Hole Mountain Resort closed its slopes Monday after a slide buried part of a restaurant, two days after an avalanche killed a skier.

“It’s been snowing nonstop since Dec. 22,” resort spokeswoman Lisa Watson said. “At this point, until this storm passes, we think this is an appropriate step.”

This winter’s unusual weather has created an instability in the layers of snow, resulting in avalanche conditions.

A fierce winter storm began dumping snow on the Rocky Mountains two weeks ago, which settled on top of an unusually thin layer of snow deposited during a comparatively dry November, making for a precarious snowpack.

In the recent slides, a slab of underlying snow is dislodged because of wind or pressure from new snow.

“It’s like a brick on top of potato chips. And the potato chips can’t hold the brick up,” said Doug Abromeit, director of the U.S. Forest Service’s National Avalanche Center in Ketchum, Idaho.

He said the storms lashing the region last week were the perfect catalyst.

“New snow and wind is the perfect recipe for building” an avalanche, he said.

Abromeit said the death toll in the backcountry was not unusual. It is the casualties at ski resorts, generally considered safe winter destinations, that illustrate how lethal the mountains have been this month.

Between 2005 and November 2008, four people died in avalanches on slopes at U.S. ski resorts. So far in December, three people have died on the slopes.

An avalanche at Utah’s Snowbird resort killed a 20-year-old skier on Dec. 14. On Christmas Day, an experienced skier died in a slide in a forested area at Squaw Valley above Lake Tahoe.

On Saturday, the Jackson Hole avalanche killed David Nodine, an experienced local skier who was swept away near the resort’s Paintbrush trail. Rescue crews found Nodine within six minutes by tracing the signal from his avalanche transponder. They dug him out in four minutes, but he had already suffocated.

On Wednesday, two snowmobilers were buried under an avalanche near Logan Peak in northern Utah. Though the men were equipped with safety gear, rescuers could not dig them out in time.

On Saturday, snowmobilers Brian Kopp, 38, and Mark Goetz, 19, were stuck on a steep slope in Grand County, Colo., southwest of Rocky Mountain National Park. Goetz’s father was riding above them when an avalanche roared down, swamping him and killing his son and Kopp, authorities said.

Ben O’Brien, a friend of Kopp, said the father of two loved to snowmobile and was cautious and well-prepared. “He was someone who was really aware of his surroundings,” O’Brien said. “He was not a cavalier guy.”

On Dec. 17, a snowboarder was buried in an avalanche near Crested Butte, Colo. And on Dec. 14, an outbound skier died in a slide near Aspen, Colo.

The largest accident was in British Columbia, in the Flathead River Basin, about 540 miles east of Vancouver. Eleven residents of Sparwood, population 4,000, were snowmobiling Sunday morning when one vehicle got stuck, said David Wilks, the town’s mayor.

A slab of snow collapsed, triggering an avalanche that buried a snowmobiler, Wilks said. His companions rushed to save him, digging deep enough to free an arm and his face. Then another slide roared down the mountain.

One snowmobiler escaped and dug out two others before a third and fourth slide chased them from the area, said the mayor, who spoke with one of the survivors.

“It’s been pretty horrendous,” Wilks said in an interview Monday.

Wilks said the snowmobilers, a tightknit group of longtime friends and relatives, were experienced and equipped with the latest rescue beacons, shovels and other safety gear. But it made no difference.

“When Mother Nature decides to rear her head,” Wilks said, “you can figure out who’s going to win.”