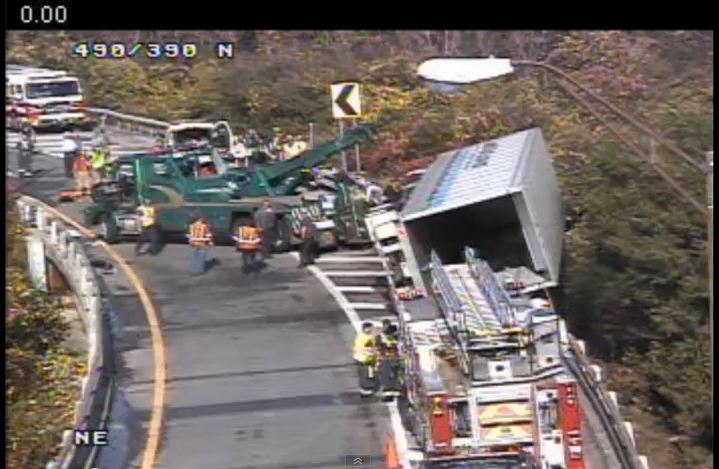 ROC Fire Audio – October 13, 2014 – The Gates Fire District was dispatched to a tractor trailer rollover on the elevated ramp from I-490E to I-390N at 12:50p.m. While en route, updates were coming in with reports of the truck cab hanging over the side of the bridge and the driver trapped inside. First due companies confirmed they had a tractor trailer on its side with the cab hanging over and driver inside. A Level 1 Special Operations response was requested bringing the Monroe County Special Op’s rope team to the scene, and a Level 0 HAZMAT was declared due to the large amount of diesel fuel spilled from the trucks saddle tanks. Multiple mutual aid was requested to the scene and to fill in at empty stations for the duration of the incident.

After using two heavy tow trucks to secure the rig firefighters were able to rappel down to the cab and place a harness on the driver after a quick medical assessment. Once the driver was removed from the cab he was lowered to the roadway below and packaged for transport. His injuries are reported to be non-life threatening. Using a third heavy wrecker a local salvage company was able to pull the truck back over the side of the bridge and onto the ramp. The cause of the accident is under investigation and the area was finally opened to traffic after the scene was cleaned up.

Initial dispatch was at 1250, driver was extricated and packaged at 1422, incident was terminated at 1812 after the truck was righted and pulled back onto the roadway.