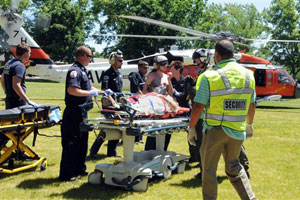 RENO, Nev. – A collision between an Amtrak train and a semi-truck at a railroad crossing on a rural northern Nevada highway killed two people Friday, authorities said.

The truck driver and one person on the train were killed in the 11:25 a.m. accident on U.S. 95 about 70 miles east of Reno, said Nevada Highway Patrol Trooper Dan Lopez.

An unknown number of other people on the train were injured and were being taken by ambulances to the hospital, he said.

Amtrak spokesman Marc Magliari in Oakland, Calif., said most of the injuries were not life threatening but he had no other immediate details about injuries. He said 204 passengers and 14 crew members were aboard the California Zephyr en route from Chicago to Emeryville, Calif., about 300 miles west of the crash site.

“A large vehicle struck the side of the train,” Magliari said. “Emergency responders are at the scene and Amtrak managers are en route. That’s all we know at this point.”

Amtrak passenger Jim Bickley told Sacramento, Calif., television station KXTV that the semi hit the fourth car on the train and two of the cars were on fire.

Passengers have since exited the cars.

The accident shut down a section of U.S. 95 between Interstate 80 and Fallon, Nev.

The tracks cross the highway about three miles south of I-80 in the heart of the Forty-Mile Desert, which was considered one of the deadliest sections of the entire overland journey by California-bound, covered-wagon pioneers in the 19th century.