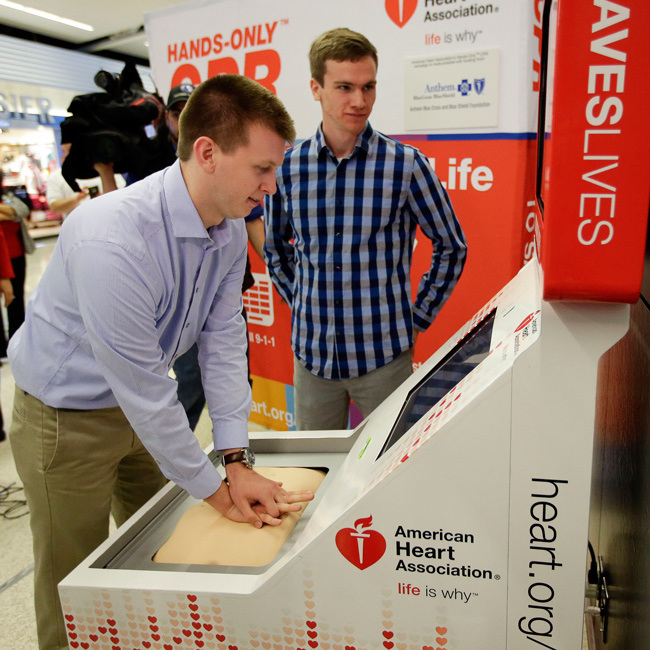 In our May 2014 column, we praised the Dallas/Fort Worth International Airport for installing a kiosk created by the American Heart Association (AHA) that teaches travelers how to perform compression-only CPR as they wait for their flights. Now, that training has officially saved a life.

University of Dayton student Sean Ferguson was crossing a school parking lot when he was struck by lightning. The impact threw him into a parked car, which knocked him unconscious. Another student, Matt Lickenbrock, was in his car when he remembered the CPR training he had learned from the Dallas/Fort Worth kiosk just two days before. As bystanders called 9-1-1, Lickenbrock performed CPR by himself until first responders arrived. Thanks to Lickenbrock’s efforts, Ferguson was able to survive the incident with a broken jaw and burns on 35% of his body. A few months later, Ferguson graduated college.

Ferguson says Lickenbrock was his “guardian angel” and that the AHA kiosk is the only reason he’s alive today. Ferguson expressed gratitude that Lickenbrock desired to learn the lifesaving technique rather than playing on his phone or heading to the airport bar.

Now the pair are doing their part to teach others about CPR. The young men recently unveiled an AHA kiosk at the Indianapolis airport, while others have sprung up at Atlanta, Chicago O’Hare, Baltimore-Washington and Las Vegas airports.

Everyone deserves access to medical treatment. That’s the vision of Zambikes, a nonprofit organization operating out of sub-Saharan Africa. The organization creates Zambulances, which are bike trailers used as ambulances in remote areas.

The idea was born after founders heard from locals that people were dying because of their inability to reach a hospital in a timely fashion. Patients were brought to medical facilities in wheelbarrows, ox carts or simply in the arms of a loved one. These and other methods of travel were unsafe and took too long, delaying treatment and in some cases, leading to avoidable death. Not to mention transportation was very uncomfortable for both the patient and the transporter. 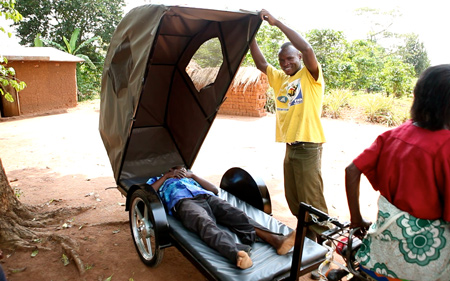 Zambulances like this one are estimated to save one life every nine days in sub-Saharan Africa. Photo Zambikes

The two-wheeled trailers can be attached to any bike or specially made Zambike designed with African roads in mind. Zambulances and Zambikes are all locally made by workers from Uganda and Zambia, creating new economic opportunities in the area.Now with the help of Zambulances, transport time has been drastically cut down, taking no more than four hours for a patient to make it to a hospital. Zambulances have been particularly helpful for pregnant women, being that hundreds of women die each year due to complications during childbirth. It’s estimated the Zambulances save one life every nine days.

We give a thumbs up to Zambikes for creating a solution to a crisis that serves the community in several ways while providing a necessary and lifesaving medical service.