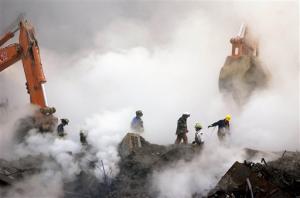 NEW YORK (NBC Washington) – Thousands of pieces of unidentified human remains from 9/11 victims will be moved from the medical examiner’s office to a repository at ground zero this weekend, according to a letter sent to families.

The repository at ground zero is in the same building as the 9/11 museum that opens to families on May 15 and to the public on May 21.

The 7,930 unidentified remains will get an escort of NYPD, FDNY and Port Authority Police vehicles when they are taken to the site Saturday morning, according to a group of victims’ relatives.

The group, Voices of September 11th, said Tuesday that there would be a “solemn, respectful” procession from the medical examiner’s office on the East Side of Manhattan, but no ceremony is planned.

The remains are not under the museum’s jurisdiction and will still be considered under the care of the medical examiner. Families will be able to visit the remains through a private room at the repository on May 15, according to the letter from the city to families.

Forty-one percent of the 2,753 people killed in the World Trade Center attack, or 1,115 victims, have had some remains identified.

Some relatives told The New York Times they are relieved the remains are being returned to hallowed ground.

“That is where they died, that is where there is a proper memorial for them, and to me it is a good, safe and holy place,” said Eileen Fagan, 66, of Toms River, N.J., who lost her sister, Patricia.

Monika Iken, 44, told the Times she would be at the site Saturday when the procession arrives.
No remains have been recovered of her husband, Michael.

“I have been waiting for this day for almost 13 years,” she said. “He needs to have me there as well. It has been a long time, and I am very happy.”

A number of victims’ relatives said they were unhappy with the timing of the letter, which came from Lilliam Barrios-Paoli, deputy mayor for health and human services.

Sally Regenhard, whose son died in the attack, said the moving of the remains was announced at “the last minute” and painfully close to Mother’s Day. She is part of a group of relatives who have been seeking to stop the remains from being moved, since the plan was announced years ago.