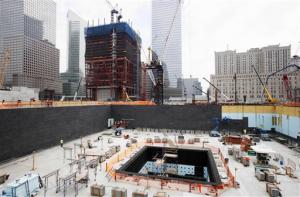 NEW YORK (AP) – They were promised a place to mourn their loved ones, display their photographs and educate their children and the children of strangers about exactly what was lost on 9/11. But today, family members of those killed have no completion date for the museum that is to be built alongside the Sept. 11 memorial at ground zero – and many are upset.

“The memorial is open, but that’s only half the tribute to those who were killed,” said Patricia Reilly, who lost her sister in the attacks. “The museum is the place where they’re going to tell the story about the people – who they were, where they were, what they were doing and what happened to them that day.”

Construction of the museum – originally scheduled to open on the 11th anniversary of the attacks – has largely ground to a halt amid a financial dispute between the Port Authority of New York and New Jersey, which owns the site, and the foundation that controls the memorial and museum. After months of little obvious progress, some family members are increasingly worried that the powers that share control of the area are backsliding into the kind of politically driven dysfunction that once paralyzed the site.

“They shouldn’t allow disagreement to get in the way,” said Reilly, who especially wants the museum to be completed so she can go there to visit the thousands of fragments of human remains too damaged to identify with DNA testing. No trace of her sister, Lorraine Lee, who worked on the 101st floor of the World Trade Center’s south tower, has been identified.

“We were supposed to get a contemplative area nearby where we could sit and pray, visit,” she said. “I’m waiting for the remains to find their final resting place.”

Work has been slowed since late last year, when the subcontractors at the site stopped getting paid. The Port Authority claimed the Sept. 11 memorial foundation owed it $300 million for infrastructure and revised project costs, while the foundation argued the port instead owed it money because of project delays. Three powerful political figures have been entangled in the dispute: The governors of New York and New Jersey control the port, while New York City Mayor Michael Bloomberg is the foundation’s chairman.

Last month, Port Authority Executive Director Patrick Foye said there had been “significant progress” toward a resolution, but any deal has yet to materialize. On Thursday, a spokesman for the port would say only that discussions were continuing. A spokesman for the foundation declined to comment about the families’ concerns.

Officials have said publicly there is no way to complete the museum by this year’s anniversary of the attacks, but no formal communication has gone out to the families to inform them of the delays and keep them apprised, some family members said.

In the meantime, personal items and mementos that families have donated to the museum are in a sort of limbo, with many wrapped and packed away in storage spaces that hold everything from damaged fire engines to children’s drawings.

“There are people out there … who hold these items as very, very precious,” said Debra Burlingame, a foundation board member whose own family’s donation has been put on hold until the dispute is resolved. They will donate a prayer card that her brother was carrying when his plane flew into the Pentagon. Somehow, the small card survived the fire, inscribed with the words “Blessed are those who mourn.”

Burlingame wants to make sure her brother’s story survives.

“You have children who were very young on 9/11 or maybe not even born yet who have no idea what actually happened that day,” she said. “That story needs to be told, and it needs to be preserved for future generations.”

The subcontractors at the site were recently paid $15 million that had been owed to them, but they won’t return to the job until there’s an agreement on future payment and a new schedule is adopted, said Ron Berger, the executive director of the Subcontractors Trade Association. Berger said this week his union is meeting with officials about future plans and he’s expecting a new completion date of June or July 2013 – a decision that would raise project costs further because of the overtime required. But no deal can be made until the port and the foundation come to an agreement.

For some family members, the problems at the 16-acre site feel like an unpleasant flashback. In 2005 and 2006, bitter negotiations between the Port Authority and private developer Larry Silverstein stalled construction on all the office towers planned for the site, with port officials calling Silverstein greedy for demanding givebacks on the rent he paid, and Silverstein saying the agency had never turned over buildable land for his office towers. In 2006, the memorial was redesigned after its projected cost rocketed and some began to question whether the project could move forward.

“It’s all politics, and it’s ridiculous,” said Jim Riches, whose firefighter son died in the trade center. “They should put politics aside and get down to business.”

Riches has given the museum the crushed helmet found next to his son’s body when it was unearthed six months after the attacks. He can ask for it back at any time, he notes, but he won’t – despite his frustration with the delays.