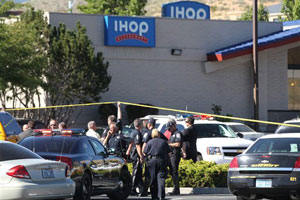 CARSON CITY, Nevada (AP) – A gunman wielding an AK-47 opened fire on a table of uniformed National Guard members at a restaurant in an outburst of violence that killed five people, wounded seven others and put Nevada’s capital city on high alert.

Five Nevada National Guard troops sitting together at the back of the restaurant were shot – three of them fatally. Another woman was also killed, and the gunman, 32-year-old Eduardo Sencion of Carson City, shot himself in the head and died at a hospital.

The shooter’s motive was unclear, but family members said he had mental issues. He had never been in the military and had no known affiliation with anyone inside the restaurant.

Witnesses and authorities described a frantic scene in the bustling business district, in which the shooter pulled into the large complex of retail stores and shops just before 9 a.m. in a blue minivan with a yellow “Support Our Troops” sticker on the back. He got out and immediately shot a woman near a motorcycle, a witness said.

Ralph Swagler said he grabbed his own weapon, but said it was too late to stop the shooter, who charged into an IHOP restaurant through the front doors.

“I wish I had shot at him when he was going in the IHOP,” said Swagler, who owns Locals BBQ & Grill. “But when he came at me, when somebody is pointing an automatic weapon at you – you can’t believe the firepower, the kind of rounds coming out of that weapon.”

The gunman went all the way to the back of the International House of Pancakes restaurant to the back area and opened fire, Carson City Sheriff Kenny Furlong said.

When he left the restaurant, he stood in the parking lot and shot into the nearby businesses, shattering several windows across the street.

Officers arrived minutes later and found the suspect and the person who was by the motorcycle wounded and lying in the parking lot. The names of the victims, including the three Guard members who were killed, were not immediately released.

Sencion left two more guns in the van – a rifle and a pistol, authorities said.

As the attack unfolded, Nevada officials worried about the violence being more widespread. They locked down the state Capitol and Supreme Court buildings for about 40 minutes, and put extra security in place at state and military buildings in northern Nevada.

“There were concerns at the onset, so we took certain steps to ensure we had the capability to embrace an even larger circumstance,” Furlong said. “At this point in time it appears to be isolated to this parking lot.”

Reno-based FBI special agent Michael West said there was no indication of any terrorist plot.

As police interviewed dozens of witnesses after the shooting and kept the gathering crowd of media at bay, a body lay on the ground, covered with a white sheet except for the feet, clad in tan boots.

Sencion was born in Mexico and had a valid U.S. passport. In interviews with investigators after the shooting, his family raised concerns about his mental health, Furlong said. Sencion worked at his family’s business in South Lake Tahoe and had no criminal history. The minivan he drove to the shooting was registered to his brother.

The shooting shocked some who knew him, including Joe Laub, his lawyer in a bankruptcy filing in January 2009, who called it an “aberration of his character.”

“He’s a gentle, kind man who was very helpful to friends and family,” Laub told The Associated Press. “I couldn’t venture to guess what would cause him to do something as horrible as this.”

In the bankruptcy filing, Sencion listed more than $42,000 in outstanding debts for a car, several credit cards and some medical expenses. At the time, Sencion reported having $200 spread over three bank accounts and $923 in disability income, mostly from Social Security.

At a Reno hospital, service members gathered, waiting for word on those killed and hurt. A hospital spokesman said four shooting victims were being treated there, but wouldn’t discuss their conditions or provide any other information.

Authorities provided few details about the five other injured people, except to say one was a woman who was found near a motorcycle. Three of those wounded have minor wounds; the others were shot in critical areas of the body, Furlong said.

“You go a whole tour in Afghanistan and no one is shot. And you go to IHOP and several are shot,” said 31-year-old Sgt. First Class Cameron Anderson of Reno, a Nevada Army National Guard member. “It’s a shock. I came to work today and had no idea I’d be driving the chaplain here (to the hospital.)”

Furlong says they’re analyzing the shooter’s weapon to determine whether it is automatic or semi-automatic.

Nevada’s capital city of some 50,000 is normally a sleepy town when lawmakers are not in session, a jumping off point 30 miles south of Reno for travelers headed to Lake Tahoe or back to California across the Sierra.

“I’ve lived in Carson City since 1961 and I’ve never seen anything like this,” said Fran Hunter, who works at the Sierra Le Bone pet shop just north of the IHOP. “This is the kind of thing that happens in New York City or L.A., not here.”