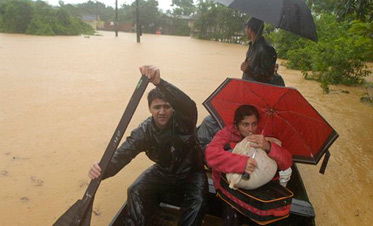 RIO DE JANEIRO — Rescue workers rushed to help residents in southern Brazil on Monday after landslides and floods caused by heavy rain killed at least 59 people and forced more than 43,000 from their homes.

The state of Santa Catarina declared an emergency as rescuers used helicopters and motorboats to reach those displaced or stranded after days of torrential rain.

The state government said the floods and mudslides had affected 1.5 million people, leaving about 150,000 without electricity and eight of the 60 towns affected completely cut off by flood waters and landslides.

The death toll was likely to rise because several people were missing, state officials said.

Brazilian newspapers showed photographs of streets submerged by waist-high water in the state, which is one of Brazil’s wealthiest and known for its large number of descendants of German and Italian immigrants.

Transport in the state was paralyzed as roads were cut off by the flooding and landslides. Television footage showed hillsides breaking away and sliding into rivers of mud. A lane of one main road collapsed.

The floods also shut down a branch of a pipeline carrying natural gas from Bolivia to Brazil, cutting off supplies to Santa Catarina and neighboring Rio Grande do Sul state, the company that operates the line said.