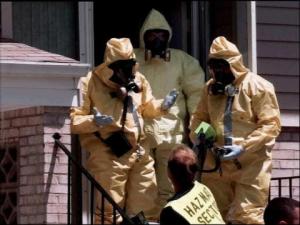 WARREN, Mich. (WDIV) – The 500-pound woman who was rescued from a filthy, bug-infested apartment in suburban Detroit died Monday morning.

An autopsy is scheduled for Tuesday.

Firefighters wearing biohazard suits removed the bedridden 41-year-old Warren woman from the apartment 2 weeks ago.
Warren Police Commissioner Jere Green said that the woman was hospitalized a few months ago and that police would review her medical records.

The fire department responded following a call from the woman’s husband who told them she needed medical attention. Investigators believe the woman was bedridden for more than a year and that she received no professional in-home health care, The Macomb Daily of Mount Clemens reported.

Authorities have said the woman had bedsores and was found in her own waste.

Four children in the apartment were examined at the scene by medical personnel before being placed with a relative who lives nearby, authorities said.

The case is expected to be brought to the Macomb County prosecutor’s office next week to determine whether charges will be filed.

Copyright 2012 by ClickOnDetroit.com. All rights reserved. This material may not be published, broadcast, rewritten or redistributed.