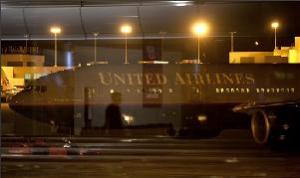 DENVER – A United Airlines jetliner hit severe turbulence while flying over Kansas, injuring 30 and jolting one woman out of her seat so forcefully that she left a crack when she hit the side of the cabin, authorities and a witness said.

The Tuesday flight was the airline’s third this year during which passengers were hurt because of turbulence.

The flight originated at Dulles International Airport near Washington, D.C., and was headed to Los Angeles. It was diverted to Denver International Airport, where it landed safely around 7:45 p.m. and was met by medical crews, Denver Fire Department spokesman Eric Tade said.

Officials said many of the injured were taken to hospitals with only moderate injuries.

At least 14 were released by Wednesday morning and at least two others were hospitalized overnight. The status of the others wasn’t immediately available.

Nine had neck and back injuries. Hospitals declined to release the nature of the other injuries.

“There are mostly walking injuries,” Tade told The Denver Post. He said the injuries included bruises, whiplash, strains and sprains.

Some passengers were placed on another flight to Los Angeles that arrived there just before midnight.

Flight 967 was flying over Kansas at an altitude of about 34,000 feet when it hit the heavy turbulence, said FAA spokesman Mike Fergus. It was carrying 255 passengers and 10 crew members.

The turbulence was “just a huge up and down,” said passenger Kaoma Bechaz, a 19-year-old Australian in the United States visiting her boyfriend.

Bechaz told the Post that the woman sitting next to her hit her head on the side of the cabin, leaving a crack above the window, and a girl across the aisle flew into the air and hit the ceiling.

Bechaz said she wasn’t thrown around because her seat belt was tight.

The crew decided land the Boeing 777 in Denver to tend to the injured, United Airlines spokeswoman Megan McCarthy said.

A 12-year-old was taken to Children’s Hospital in Aurora, but a spokeswoman there didn’t know the nature of the child’s injury.

The seven patients taken to Denver Health _ all women _ were being evaluated but likely would be treated and released Tuesday night, spokeswoman Dee Martinez said. Three people went to Swedish Hospital in Englewood with moderate injuries, spokeswoman Julie Lonborg said.

Two people were treated and released from the University of Colorado Hospital and two others were being evaluated, spokeswoman Erika Matich said.

Tim Smith of Boulder was on United Flight 937, which also flew into Denver from Washington on Tuesday and landed after the diverted plane. He said his flight was delayed because of thunderstorms but didn’t have any problems.

Smith saw ambulances and police cars surrounding a gate on the tarmac and one person on a stretcher when his plane taxied to the gate.

“Thank God I wasn’t on that flight,” Smith said.

Inspectors found “no obvious damage” to the diverted plane’s exterior, Gregor said. They also found nothing wrong during a preliminary look at the plane’s interior. But Fergus said the incident would be a “front-burner item” for both the FAA and the National Transportation Safety Board.

In February, about 20 people were hurt when a United flight with 263 people onboard experienced turbulence halfway through a 13-hour trip from Washington, D.C., to Tokyo.

In May, 10 people suffered injuries, including broken bones, on a United flight that hit severe turbulence over the Atlantic Ocean on its way from London to Los Angeles. The Boeing 777 was diverted to Montreal.

Associated Press writers Judith Kohler and Thomas Peipert in Denver and Denise Petski in Los Angeles contributed to this report.