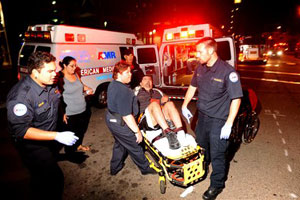 SAN FRANCISCO (AP) – Service at an Oakland train station was restored Thursday morning and an investigation was under way after an Amtrak train crashed into another train that was unloading passengers, injuring 17 people.

Several people were taken to local hospitals after Wednesday night’s crash, but all the injuries were considered minor and non-life-threatening, officials said.

The company said both main-line tracks reopened Thursday morning but passengers should expect “minimal delays through the morning hours.”

The train was traveling an estimated 15 to 20 mph when it struck the stationary Amtrak train around 10 p.m., Oakland Fire Department battalion chief Emon Usher said.

Usher said company officials told him the train went through a red light.

“According to the Amtrak representative, the train traveling should have never continued past the red signal,” Usher told The Associated Press.

Amtrak spokesman Cliff Cole said he could not comment on the report of the train running a red light.

He described the crash as a “low-speed” collision between Amtrak’s “San Joaquin,” a train that operates between Bakersfield to Oakland, and Amtrak’s Coast Starlight, a train from Los Angeles to Seattle.

He said the wheels of each lead engine went off the track.

Amtrak and the owner of the tracks, Union Pacific Freight Railroad, plan to work with federal officials to investigate the crash, according to Amtrak.

Authorities originally reported 16 injuries in the crash, but the company arrived at the higher figure after compiling numbers overnight, Cole said.

Alton Smith, a passenger on one of the trains, told television station KTVU he felt an “awful jolt” from the impact.

“We didn’t even think that another train had hit the train,” she said.

A couple of hours after the crash, about 50 passengers were gathered inside the train terminal, talking to Amtrak officials, while Amtrak and local officials inspected the two trains.

Passengers who paid for travel on canceled trains can contact Amtrak to receive a refund without fee or penalty, the company said.

The crash is the second significant incident in two weeks in the San Francisco East Bay area where there were injuries to Amtrak passengers.

On Sept. 30, 37 passengers and two crew members suffered minor to moderate injuries when an Amtrak passenger train collided with a truck at a crossing near Brentwood where there were no lights or gates.

The driver of the truck and a passenger inside were not hurt.

AP broadcaster Sofia Mannos in Washington contributed to this report.