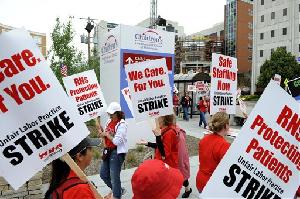 MINNEAPOLS – Outside Abbott Northwestern Hospital, what was called the largest nurses strike in U.S. history began Thursday to the sounds of “Amazing Grace” played on Michael Redmond’s bagpipe.

The 50-year-old nurse, wearing a red Minnesota Nurses Association T-shirt and green plaid kilt, said he picked the song because of its history as an old abolitionist rallying cry. He played as night-shift nurses walked off the job early Thursday.

A key issue in the dispute was the nurses’ demand for strict nurse-to-patient ratios, rejected by hospitals as inflexible and unnecessary. Sue Stamness, a cardiology nurse at Abbott for 24 years, said patient safety was the nurses’ top concern.

“Nobody is listening to what we are saying,” Stamness said.

The nurses began their one-day strike at 7 a.m. at 14 hospitals in the Minneapolis-St. Paul area. Organizers said nurses would walk picket lines in three eight-hour shifts and by the end of the day nearly all 12,000 would participate.

Though called the largest nurses’ strike in U.S. history by both the union and the hospitals, the immediate effect was expected to be minimal. Hospitals hired 2,800 replacement nurses, called in extra non-unionized staff, reduced patient levels and some hospitals rescheduled elective surgeries. Staff of two of the metro area’s largest hospitals weren’t involved in the strike.

Near midday, hospital officials said they were having no problems with patient care, with more than enough nurses on hand. Maureen Schriner, a spokeswoman for the hospitals, said all the hospitals were open and that emergency and childbirth departments were fully staffed. Patients with specific questions about their care Thursday were asked to call their doctors.

Plans by thousands more nurses in California for a simultaneous one-day strike were blocked earlier this week by a San Francisco judge. A series of rallies were scheduled instead.

Minnesota nurse Jenni Foster said it was “horrible” to walk out of the neonatal intensive care unit, which cares for the sickest infants, at Children’s Hospital in Minneapolis on Thursday morning.

She said the nurses briefed extra physicians and non-striking nurse practitioners brought in Thursday about the patients then were escorted out by security.

Foster said she believes in the union’s call for increased nurse staffing, but she wasn’t sure a one-day strike would break the stalemate in negotiations.

“I just don’t know if it’s going to be effective,” she said.

In the cardiovascular intensive care unit at Abbott early Thursday, nurse Bridget Parks said extra doctors were around to reinforce the replacement nurses. A lot of them. “It is amazing how many physicians they thought it took to replace the nurses,” she said.

Like other businesses, hospitals are trying to trim their budgets even as health care costs have been skyrocketing. Nurse pay and benefits are among the hospitals’ largest expenses. Nurses oppose proposed pension cuts and complain that staffing levels have reached dangerous levels, making their jobs ever more stressful.

Patients are older and tend to be sicker, with multiple chronic conditions. Also, advancing medical technology is putting new demands on nurses, said Karen Higgins, a Massachusetts nurse and one of three presidents of National Nurses United, a national union of 155,000 nurses that was formed when three regional unions joined six months ago. The Minnesota Nurses Association is affiliated with it.

“They’ve had enough,” she said. “It’s time to say that we’re going to do what we have to do to protect our patients.”

The union is billing the strike as the nation’s largest. In 1997, about 7,300 California nurses went on strike for two days in January and one day in February, according to the California union and published reports. For five weeks in 1984, about 6,000 Twin Cities nurses also went on strike.