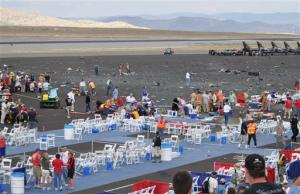 Her husband, the father of their two young children, was sitting in the VIP section where a fighter plane landed in an explosive crash Friday afternoon. Salerno’s friend was taken to the hospital with critical injuries. There was no way Salerno, an avid racing pilot there to watch the show, had survived.

“The family knew,” said Tony Buzbee, a spokesman for the Friendswood, Texas family. “There is no delicate way to say this; the problem was there was no way to confirm he was dead other than DNA testing.”

Medical officials confirmed Salerno’s death to his wife Monday night, bringing the death toll in what has become the nation’s deadliest racing disaster up to at least 11.

A spokesman for the medical examiner’s office said investigators have been trying to identify body parts since the gruesome accident at the annual National Championship Air Races. The names of all the known fatal victims had been confirmed by police or family by late Tuesday. Another 14 victims remained in area hospitals for treatment.

More than 1,300 people had called a Reno crisis line in the days after the crash, many to report missing race spectators. Officials are trying to track down each missing person but have not released an official count.

“They have an awful lot of legal hurdles that they have to go through before they can announce especially the names (of the dead) but also the number of deceased,” Washoe County spokesman Chris Matthews said. “They have to verify that they are in fact looking at a deceased person, as opposed to looking at an arm of a person who is not deceased and is in the hospital.”

The newly identified victims were a Kansas woman previously reported missing, a father who took his 12-year-old son to see the racing pilots, a man who loved airplanes and Salerno.

Relatives of the Kansas woman, 71-year-old Cheryl Elvin of Lenexa, had said she was likely dead because the relatives who had attended the show with her were all taken to area hospitals for critical leg injuries.

John Craik, 45, of Gardnerville, Nev., died after taking his son to watch the race. Virginia Craik told The Associated Press that her grandson was not seriously injured and is back in school.

James McMichael, 47, of Graham, Wash., was at the show because he “loved planes,” his mother, Darlene McMichael, said. “That’s why most people go to those things.”

She said her son was survived by his wife and an extensive family.

“Our family has a great faith,” she said. “And we feel like things happen for a reason. It doesn’t make it easier.”

Salerno was a dispatcher for Continental Airlines and a lieutenant for a volunteer fire department, said Buzbee, a Houston lawyer representing the family. Salerno also volunteered with the annual Wings Over Houston Airshow, where he served as a liaison between the main act and the show.

“He was just one of those kind of people that many people know,” Buzbee said. “He made the community work.”

Salerno was given his VIP ticket by a friend, Buzbee said.

“It’s a very difficult time for his wife and children,” Buzbee said.

More than 70 people were treated for injuries, some of them life-threatening, in the unexplained crash that also took the life of 74-year-old stunt pilot James Leeward. His WWII-era fighter plane dived into a crowd during the nation’s premier aviation competition. Shrapnel sprayed at the fans, cutting limbs and other body parts.

Boeing engineer and longtime pilot Dave Desmon organized a group of people with ties to Washington to attend the show. They were standing near the finish line when the plane crashed about three feet from them.

“We were trying to figure out which way to run basically,” Desmon, 51, said.

Among the dead were Desmon’s friends, George Hewitt, 60, and Wendy Hewitt, 56, of Fort Mohave, Ariz. Another friend lost an arm and had a cracked skull. Desmon’s girlfriend broke her leg.

George Hewitt was a recently retired pilot and Wendy Hewitt was a passionate volunteer who served the United Way, American Red Cross and charities devoted to low-income children and women. They were learning Mandarin for an upcoming trip to China, Desmon said.

The others killed who had previously been identified were Sharon Stewart, 47, of Reno; Greg Morcom, 47, of Stanwood, Wash.; Michael Wogan, 22, of Scottsdale, Ariz.; and Regina Bynum, 53, of San Angelo, Texas.

During the annual Reno competition, planes flew wingtip-to-wingtip as low as 50 feet from the ground. Pilots reached speeds of up to 500 mph.

Leeward was the 20th pilot to die at the races since it began 47 years ago, but Friday’s crash was the first where spectators were killed. Some of the injured described being coated in aviation fuel that burned.

Leeward was a veteran air racer from Ocala, Fla., who flew in Hollywood films. He loved speeding, on the ground or in the air, and had recently taken up racing cars.

It was the second year Leeward had competed in the competition with his modified Galloping Ghost fighter plane. He won several races last year but the gold medal had eluded him, Desmon said.

“He wanted to go against the national champion and show that he was the fastest airplane there was,” Desmon said. “It was a race we were all really looking forward to.”

Cristina Silva can be reached at http://twitter.com/cristymsilva.