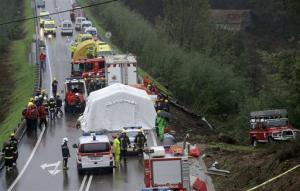 LISBON, Portugal (AP) – A bus crashed and fell into a ravine near the eastern Portuguese town of Serta, killing 11 people and injuring 32, officials said Sunday.

National Civil Protection authority spokesman Carlos Guerra said the injured were flown and driven to hospitals in nearby cities. One injured person died in the hospital.

Television images showed a large rescue operation mounted on the rain-soaked approach road, including more than 260 firefighters and at least one rescue helicopter.

The Spanish-registered bus was reportedly traveling from the city of Badajoz in Spain to the tourist destination of Santa Maria da Feira. Civil Protection spokesman Rui Esteves said all the occupant of the bus, including the driver, were Portuguese citizens.

Some of the passengers were trapped inside and images showed firefighters cutting sections of the bus to rescue them.