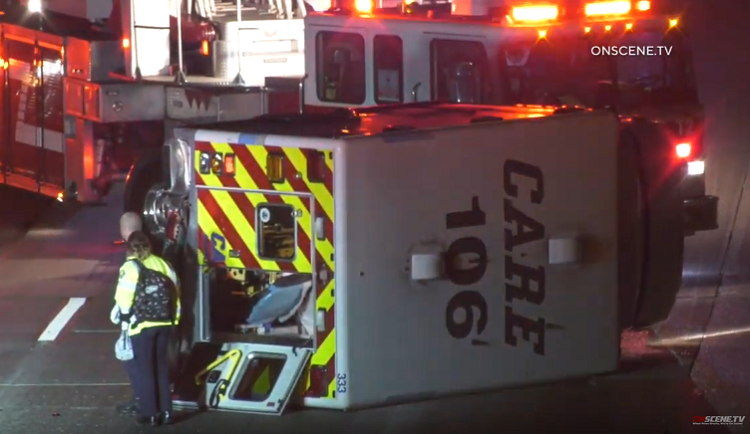 ON SCENE TV – 11.10.2019 | 4:17 AM | FULLERTON – Four people including a boy and at least two firefighters were injured after a fiery hit-and-run crash that left the ambulance they were riding on its side, early Sunday morning.

A Care Ambulance occupied by a two firefighters, and an emergency medical technician was transporting a young boy to an area hospital when it was involved in a rollover crash on the eastbound SR-91 Freeway near Harbor Boulevard around 4:17 AM.

The impact of the crash left the ambulance overturned on its side and caused another vehicle, a silver Chevrolet Trax, to burst into flames.

The occupant of the Chevrolet was able to free themself from the vehicle and fled the scene on foot. They were not immediately located.

Additional firefighter paramedics arriving on scene treated and transported all four occupants of the overturned ambulance to area trauma centers.

All eastbound lanes of the SR-91 Freeway were closed until further notice while authorities investigated the circumstances surrounding the fiery hit-and-run crash.

0
Rescuers search through wreckage of a passenger train overpass collapse onto a busy boulevard in Mexico City.