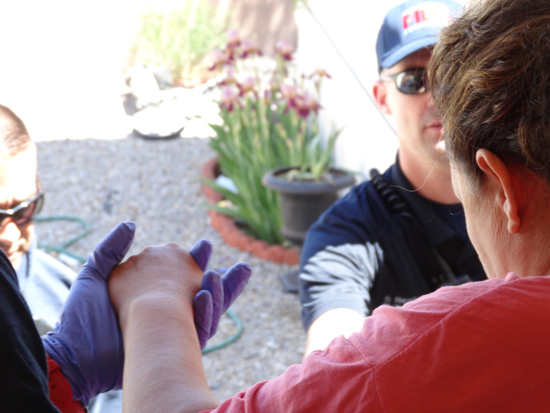 A group of leaders within the prehospital care arena want to get the entire field of EMS to think differently about roles within the healthcare field.

The first step from the group is a white paper proposing a Mobile Integrated Healthcare Practice (MIHP) designed to make EMS part of a broad range of services working together to fill gaps in local communities and make the entire healthcare system work more efficiently.

Under the framework set out in the paper, titled “Mobile Integrated Healthcare Practice: A healthcare delivery strategy to improve access, outcomes and value,” providers will create patient-centered systems that offer services specific to the needs of their population. The MIHP systems rely on strategic partnerships working together–not just one agency alone.

“The reason we’re all using this term is because it’s much more than “˜community paramedicine,'” says Matt Zavadsky, MS-HSA, EMT, and director of public affairs at MedStar Mobile Healthcare.

Indeed, as stated in the white paper, community paramedicine programs have typically been confined to defining new roles for existing EMS staffers and have not been “endeavored to demonstrate improved resource integration or value to patients.” The MIHP paper is designed to provide a jumping-off point to get the process moving.

“I would say it’s still evolving, but this isn’t a fad anymore,” says Gary Wingrove, director of government relations and strategic affairs at Gold Cross/Mayo Clinic Medical Transport. “It’s here to stay. There’s enough people on the uptick with it–it’s going to be around for a while.”

The latest white paper was the result of a 12-month process among some of the field’s brightest minds to create a national framework for a change that was slowly coming to prehospital care. Where typical community paramedicine programs worked alone and were not fully engaged with the other elements of the healthcare infrastructure, the MIHP system ties them together as partners.

“With a shared unifying strategy framework, it will be easier to reproduce, scale and quantify impacts arising from these out-of-hospital programs,” the paper states. “Moreover, failing to meaningfully engage the full range of stakeholders will marginalize these efforts and frustrate inter-professional integration.”

Indeed, all agree that working with all stakeholders in the healthcare system is the only way MIHP will take off. By getting everyone around the same table, the partners can identify regional needs and ensure they’re working together, while not cannibalizing each other.

“We’re never going to get away from the core mission of EMS,” says Jeff Goodloe, MD, NREMT-P, director of the EMS Division, Department of Emergency Medicine at the University of Oklahoma School of Community Medicine”But, I think today we’re capable of doing so much more than just the core mission. We’ve matured as a discipline.”

“We’ve got to be integrated,” says Myers. “And to do that you have to have everybody around the table.”

“Philosophically, the MIHP framework is structured to provide patient-centered care with every effort made to ensure patients receive the right care, by the right provider, at the right place, in the right time and at the right cost,” the authors wrote.

Simply put, there may be ways to treat a patient calling 9-1-1 in a more effective manner than simply loading them into an ambulance and clogging EDs with routine care cases. Could, for instance, someone calling 9-1-1 with a non-emergent situation be treated in an alternative setting?

Making the concept work, however, takes time, training, funding and stakeholder buy-in. The group behind the paper, which includes some folks already participating in such programs, believes for MIHP to take off, it can’t be adopted by one agency, but needs to be created by having everyone involved. This way, they say, by including home healthcare services, hospitals and any other possible stakeholders, they can see how the MIHP benefits everyone.

“If you develop these things in a tube of excellence–a silo–you may find people who are less than enthusiastic,” says Zavadsky.

There’s more to the notion of MIHP than just helping patients. Those agencies with pilot programs in place find staff morale is up despite some initial fears that doing more than taking people to the hospital will cut their jobs. By giving providers a bigger hand in the treatment of their patients, staffers feel better, says Zavadsky.

“Most people who go into EMS do so because they want to make a difference,” Zavadsky says. “After they’ve been in the business they realize most of the calls they respond to are not true emergencies.”

By being part of a MIHP program, though, those same EMS providers may get more satisfaction by making decisions–and ultimately, a difference–in a patient’s care. To get to that point, providers need additional training designed to educate them about a patient’s overall care.

“I really believe that education is one of the keys to success,” says Wingrove, citing a program delivered by the North Central EMS Institute in St. Cloud, Minn., geared for the next wave of MIHP providers.

While the concept is solid, those involved in the boom with MIHP realize there are still many hurdles ahead before the contents of the white paper are widely adopted. Diverting patients from trips to the hospital cuts transport revenues and agencies must find other ways to pay for the program and generate revenue.

“I’m very optimistic, but I’m a bit reserved on the funding aspect, simply because new concepts often have to pass sufficient muster before funding is realized,” says Goodloe.

Wake County, N.C., for example, has been funding a pilot program for the past three years. “We’re not trying to make money, we’re just trying not to lose money,” Myers says.

Funding issues aside, it’s clear the movement toward MIHP is here. The National Association of EMTs recently published a paper on the topic and there will be a Mobile Integrated Healthcare Summit held March 25 in Washington, D.C.

The next step, says Goodloe, is the creation of a guide to implementing MIHP, which is expected sometime in 2014.

“We’re certainly better today in the quantity of answers than we were 12 months ago,” says Goodloe. “The exciting thing is there will exponential growth in this. We’ll see more development in the next 12 months than ever before.”