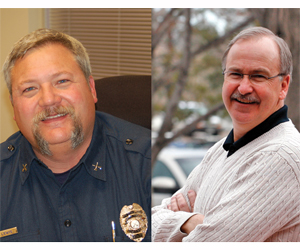 The Denver metro area isn’t Gotham City. It doesn’t have Batman or Robin or the Riddler, but it does have the Batmobile. A gadget-laden EMS Batmobile to be exact. And it would make even Batman envious.

The program comes from Dr. John Riccio, chief medical officer for True North Health Navigation and EMS medical director for Centura Health Prehospital Emergency Services, and Rick Lewis, EMT-P, EMS chief for South Metro Fire Rescue Authority, all located in Colorado. The initial idea came to Riccio as he was caring for his 91-year-old mother, who was grappling with medical problems. He was trying to keep his parents living together in their home and encountered many challenges. “I’m a medical professional, and I couldn’t effectively navigate the system,” he says.

Healthcare Delivery
Riccio knew other families were plagued by the same issues and were probably trapped in a cycle of 9-1-1 calls, hours-long hospital waits, then back home to then repeat the cycle. He knew there had to be a better solution for low-acuity calls than automatically transporting to the ED.

Rick Lewis was also considering better ways to make response to emergency calls more efficient. “When you call 9-1-1, you always get all the troops,” he says. “You get a fire engine, paramedics–you get eight guys. And the call could be for a nosebleed. Meanwhile, if a guy a block away has a heart attack, paramedics may not be available. Then you have to call somebody further away.”

So the two sat down and came up with an innovative answer that combines the fire department and EMS paramedics with a nurse practitioner in the ARM vehicle. “The idea is to bring advanced care to people on scene, so we don’t always have to transport them,” Riccio says. “That’s how we came up with the idea of marrying what we do in the Emergency Department with what EMS does.”

The ARM car is one piece of a larger whole in providing healthcare delivery; it’s really more of a system. The initial triage for calls is done through MetCom, an advanced dispatch system. When a call comes into 9-1-1, the dispatcher asks a series of questions and then determines where the call fits on the acuity scale. “So the Alpha and Bravo are lower acuity calls and the ARM car is going to those,” Riccio says. “That decision is being made by dispatch. We are going to lower acuity because that’s who we’re trying to take care of. We don’t want to tie up our big guns with those calls.”

While some growing pains are expected when adding priority medical dispatch into a system, according to Lewis the process has gone smoothly.

Into the Field
The ARM vehicle, which is a Clinical Laboratory Improvement Amendment (CLIA)-approved moderate complexity lab, is a state-of-the-art rolling medical laboratory. It offers the technology to perform chem panels, B-type natriuretic peptide (BNP), international normalized ratio (INR), prothrombin time (PT), partial thromboplastin time (PTT), strep, urine human chorionic gonadotropin (UHCG), mono testing and hemoglobin A1C. “And we can do a complete blood count (CBC), which differentiates us from the rest of the mobile laboratories because they can rarely do a complete blood count with differential,” Lewis says.

The vehicle allows the paramedic and nurse practitioner to splint, suture, staple, pack nosebleeds and administer IV antibiotics. “The moderate complexity makes it more like a modern hospital laboratory,” says Riccio. “We can do a lot of advanced EMS.”

Simply put, the ARM car brings emergency medical technology and skills out into the field. “The CLIA lab is not something I’ve heard a lot of other people doing,” Riccio adds. “As far as I know, we are the first ones to have the CLIA lab.”

The ARM car program is aimed at the area’s skilled-nursing and assisted-living centers, which are experiencing tremendous growth. “They open a bed a day in our district and have for the last three years,” says Lewis. “Our district is 176 square miles, and when acuity goes up, with respiratory ailments, cold and flu, those calls just skyrocket.”

Community Needs
So far the program has served more than 70 patients, and the number is growing. Lewis and Riccio have been meeting with the skilled-nursing and assisted-living centers in the area to spread the word about the program. “We’re trying to get them to think of using us to help with these patients,” Riccio says. Being transported can be stressful and confusing for elderly patients, and the centers have to deal with holding beds and giving away beds if patients don’t return in a timely manner. “It’s a nightmare,” says Riccio, one that can be avoided many times by simply having the ARM car come to the patient.

“An important part of any of these integrated mobile healthcare programs is fitting the need to your community,” Riccio adds. “We thought this was a big gap in our community in so many areas. We want to help people navigate the system, and there is the convenience of bringing care right there on scene.”

One advantages of the ARM car is the nurse practitioner, who talks to the families and homecare nurses, arranges for follow-ups and coordinates numerous details for patients. “A lot of it is just putting together all the pieces of care and integrating it so that everybody is on the same page,” Riccio says. In addition, the program integrates medical records, which go to primary care physicians and other healthcare providers. The ARM car also has the capability to display patients’ hospital medical records via CORHIO, the state health information exchange (HIE).

Lewis relays a story of a woman from Michigan who visited Denver and developed tremendous back pain. “The nurse practitioner consulted a neurosurgeon who recommended she have an injection for her herniated disc,” he says. “The nurse made lots of calls until she got the patient in to see an interventional radiologist in less than 24 hours, which is unheard of here.”

Lewis also tells the story of a 22-year-old autistic man who sustained a laceration. “The last time they had to take him to the hospital, they had to tie him down and sedate him,” Lewis says. The ARM car treated the 22-year-old in his home with no issues. “His mom is a registered nurse, and she was just floored,” Lewis says. “For him, leaving the environment is way worse than any injury he could sustain.”

Cutting Edge Medicine
The cost of the ARM program is born by South Metro Fire, including the purchase of the vehicle and the cost of buying and installing the lab equipment. But the savings have more than made up for those costs. According to Riccio, an ambulance transport averages $1,000 and care provided in the emergency department costs another $2,200. “If we take care of you [with the ARM car], the cost is closer to $500,” he says. “We plotted that out, based on the volume we’re seeing, and the citizens in the South Metro District will save almost $2 million this year.”

Lewis, a 32-year veteran of EMS in Denver, acknowledges that the city practices cutting-edge medicine but can be hesitant to try new things. He also acknowledges that EMS and physicians tend to be risk averse–all of which contributes to the default decision of taking patients directly to the ED. “We are participating in this healthcare pile-up,” Lewis says. “We are using the most expensive conveyance to go to the most expensive place to get treated for things that are low acuity.”

Lewis credits his chief, Daniel Qualman, for having the vision to see what a program such as ARM can do for a community, even if it takes a while to gain traction. Riccio and Lewis also thank Dr. Jeff Beeson and MedStar Mobile Healthcare of Fort Worth, Texas, and Dr. Gary Smith of the Mesa Fire Department for their help and guidance in this endeavor. “They are all in,” Lewis says. “When you have that kind of backup, it makes you kind of fearless. So we can have the temerity to watch it blossom.”