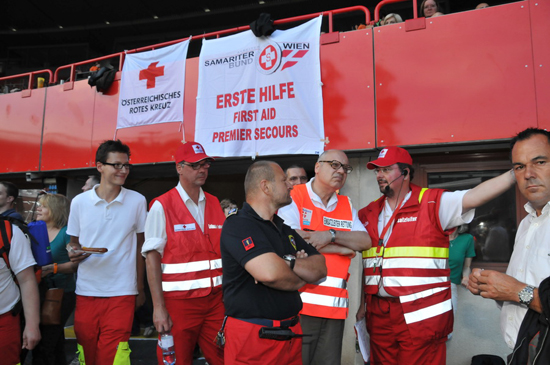 Redelsteiner has witnessed the European nation’s medical environment change a great deal since he began in the ambulance service in 1984. Back then, family practitioners making house calls for non-emergency situations were the norm. Basic EMTs, a few paramedics (such as himself) and physician-staffed ALS handled the more urgent calls.

As a result, more and more Austrians have turned to calling 9-1-1–or more accurately, 1-4-4 in Austria–for problems that, while may not be classified as “emergencies” by an EMS agency, certainly seem urgent to a patient with nowhere else to turn. This is especially true for the elderly, who may not have access to transportation, the Internet or a mobile phone.

“In Austria, you have many different places you can ask for medical help, but if you’re unskilled with the Internet or a mobile phone, you don’t know, “˜Should I go to a family clinic, should I go to a hospital, shall I go to the doctor’s service, shall I go to the ambulance service, shall I call a psychosocial crisis line?'” Redelsteiner said. “So if you’re ill, you’re not in a position to know what is the best resource for you. You just don’t feel good.”

“So what people do is call 9-1-1 “¦ and they say, “˜Please send me an ambulance, I’m not doing well,'” Redelsteiner continued. “And from a patient’s perspective, what other options do they have?”

Today, Redelsteiner estimates that a mere 10—20% of emergency calls are for the actual emergency situations he saw so much of back in his early days in the ambulance service. The others come from situations listed above, where the issues seem more similar to his days as a social worker.

Because of this, he’s developed a seemingly obvious solution to the problem: Train the responders flooded with non-emergency calls to fill the void created by the dearth of family practitioners. Or, put more simply: Train responders in both paramedicine and nursing.

The idea seems simple enough, but implementing it would prove far more complex. First, paramedics would have to significantly broaden their practice scope. That means incoming EMTs would need to receive training in disciplines like nursing and social care in addition to EMT-P training. Second, current medical systems and EMS agencies would have to find a way to incorporate these broadly focused paramedics into their existing systems, while also taking on the challenge of acting as intermediaries between the patients and non-emergency medical services.

The challenges seemed daunting, but Austria did have one thing going for it: Redelsteiner’s background seemed to make him the perfect person to make the solution work.

Redelsteiner is quick to point out that he was in no way alone in this effort. In August 2014, he was initially approached and encouraged by Wolfgang Sobotka, vice governor of Lower Austria, to address the problem. Since then, Redelsteiner said he’s developed an inner circle of 20 people helping him throughout every step of the way. Petra Ganaus, RN, Sigi Weinert, EMT, Christian Fohringer, MD, are a few of the many allies he names who supported the endeavor.

The challenge would balance a broad spectrum of stakeholders from professors to lawyers to healthcare policy experts. If anyone could bring the diverse group of stakeholders together, it would be hard to imagine someone better suited than Redelsteiner. In addition to his experience with the EMS service, he worked for several years as a social worker in psychiatry and crisis intervention, two key areas EMTs and paramedics often encounter when responding to non-emergency calls. Furthermore, unlike most others in Austrian healthcare, Redelsteiner had received much of his education in the United States–his paramedic training in Georgia and his master’s in emergency health services at the University of Maryland, Baltimore County–which afforded him a unique perspective in approaching such a dramatic revision to Austria’s EMS system.

Redelsteiner says his experiences in the U.S., Germany and Austria have taught him that EMS needs to do more than simply transport every single patient to the hospital, since such a blanket response creates a ripple effect of inefficiency throughout the healthcare system.

“In most western nations–and I know it from the U.S. as well–our problem is overcrowding of hospitals,” Redelsteiner said. “We cannot fill our hospitals with people who do not belong in hospitals.”

Revising paramedic education is the keystone to Redelsteiner’s solution, and in his view, it’s an aspect critical to ensuring sustainable change in Austria’s prehospital emergency system.

In Austria and in many western nations, paramedicine is a young person’s work. The hours and physical demands are tough even for those in peak physical condition. Current EMT and paramedic education in Austria, however, is narrow to the point that transitioning out of paramedicine into another medical field requires complete retraining.

To train future Austrian responders in both nursing and paramedicine, consequently, has two simultaneous benefits. It allows the EMS system to become more responsive to non-emergency calls, but it also gives personnel the training needed for a long-term career in healthcare.

“So what we’re trying is this program to educate people in both paramedicine and nursing, so that they also could do 10 or 12 years of EMS work, then they can say, “˜OK, let’s go to the hospital,'” Redelsteiner said. “It’s a safe environment, it’s a clean environment, it’s a team environment, and it’s not a two-person ambulance. So I think this could help to attract and to keep people in the profession.”

Redelsteiner leads the EMS curriculum at the St. Polten (Lower Austria, Austria) University of Applied Sciences, where 60 students make up the first class taking paramedic courses from Redelsteiner and nursing courses at the corresponding Bachelor in Nursing. The two will come together to form a unique nursing bachelor’s degree with an EMT-Intermediate certificate. Much of Redelsteiner’s work is ensuring the two disciplines work in tandem.

“It’s not a shotgun wedding, but a merging of cultures,” he said.

The challenge of creating such an interdisciplinary approach is as much legal as it is pedagogical. Nursing is regulated at the federal level by Austria’s National Ministry of Science, while paramedic training is overseen at the state level. As a result, the two professions are controlled by two largely independent agencies.

“So it took quite an effort to balance out the different expectations of different stakeholders,” Redelsteiner said. “And since it was a new combination–combining two different professions–we encountered quite some resistance on various levels. But in the end, we were able to integrate all the important stakeholders into this issue.”

To ensure all parties were on the same page, Redelsteiner and his colleagues organized a large international conference on the role of paramedics, looking at other countries, such as those in Scandinavia, where nursing and paramedicine are much more closely intertwined. Over 400 people attended.

Now, with the first cohort of students underway, the next natural step is to ensure the graduates have jobs that utilize their unique skill set when they earn their degree in two years. Redelsteiner says one way to do this has already proved very effective in parts of Scandinavia, where the combined nurse-paramedic works in rural areas making regular house calls with the ambulance. This allows them to fill basic home physician needs, respond to emergency calls when needed, and play an intimate, familiar role within these communities.

“This is a model we really have as a vision for the rural areas in Austria,” he said. “And this of course means a lot of change for a lot of people.”

Redelsteiner overcame many challenges in the last several years, bridged many a great divide and undertook serious professional risks to do what no one before had dared to. In such challenging times, Redelsteiner thinks of his role model, Professor Peter Safar, an Austrian who reinvented CPR and helped develop paramedicine in the United States. He says one of Safar’s 22 rules of life comes to his mind often: “Bureaucracy is a challenge to be conquered with a righteous attitude, a tolerance for stupidity and a bulldozer when necessary.”

Although, with Redelsteiner’s bold venture into uncharted waters within EMS education, another of Safar’s rules for life might be more apt: “When on thin ice, dance.”