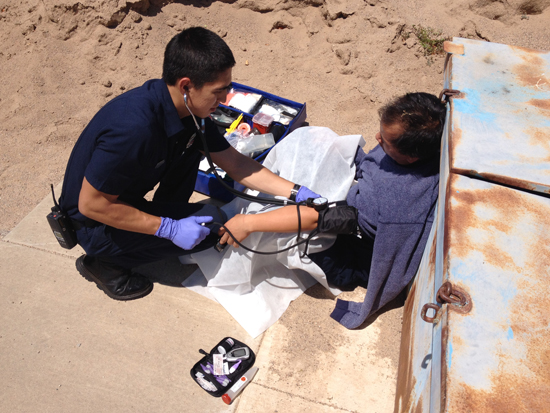 Today, firefighters have become the jack-of-all-trades in emergency prevention, preparedness and response. When a customer calls 9-1-1 for help, firefighters respond with appropriate units, equipment and personnel–or do they?

Sending six firefighters to a 9-1-1 call might appear legitimate, but it may also be fiscally irresponsible and excessive. In truth, the emergency 9-1-1 system has become today’s primary healthcare system. Many customers know–especially after calling 9-1-1 a few times–exactly what to say when they want an emergency response. So how are communities and administrators dealing with this issue? The latest, cutting-edge and much hyped method used by today’s forward-thinking fire departments is community EMS (CEMS).

Often referred to as mobile integrated healthcare or community paramedicine, CEMS is the hot topic in EMS. CEMS isn’t really new–it’s been around since the early-90s–but it’s been gaining traction and is making a positive impact on communities nationwide. Simply put, sending a nonemergency unit to a non-emergent 9-1-1 call can save wear and tear on both response vehicles and personnel. In fact, it saves the customer, the response organization and other community EMS partners a lot of money, while still providing appropriate patient care and using emergency response units for true emergencies.

If 9-1-1 calls requesting EMS response continue to grow, AFD’s current resources may be stretched too thin, possibly causing bad outcomes for waiting 9-1-1 customers. In a profession where “time is muscle,” AFD Fire Chief David Downey, Deputy Chief Karl Isselhard and Medical Director Andrew Harrell, MD, decided to be proactive in their response configurations in order to meet the needs of their community.

Specifically, Downey supported the need for ED alternatives, preventing hazards for the elderly and chronic alcohol and drug abusers through the implementation of new emergency response methods and believed that relief to local hospitals, jails and emergency response units–through CEMS–would provide a better quality of life for citizens of and visitors to Albuquerque.2

Solving non-emergent 9-1-1 call problems can be very complex due to factors ranging from psycho-social issues, fragmented care, lack of follow-up and an aging population.3 It’s important to take a close look at the data to discover possible solutions. Analyzing Albuquerque’s call data revealed that many callers suffered from chronic inebriation, so the AFD partnered with the Albuquerque Police Department (APD), the University of New Mexico Hospital (UNMH), and the Bernalillo County Metropolitan Assessment and Treatment Services (MATS) Center to create a CEMS response program: the Public Inebriate Intervention Program (PIIP).

Staffed with an AFD firefighter EMT and an APD police officer, the PIIP unit responds to public inebriates and offers transportation to those who qualify (i.e., has no medical issues and is nonviolent) to MATS, where they’re provided food, shelter and a safe environment to recover from acute intoxication. The PIIP team responds in a van or police squad car and is on duty four days a week (Tuesday, Thursday, Friday and Saturday) from 1:00—11:00 p.m. The citywide PIIP unit locates inebriates by actively driving around and looking for them in known locations or after being dispatched from a 9-1-1 dispatch center or by an on-scene APD or AFD unit. Between responses or requests for service, the PIIP unit drives around Albuquerque offering education and aid to those in need.

Once on scene with a possible patient, the police officer makes first contact, clearing the patient for assessment and the scene of any dangerous issues or concerns. The firefighter EMT then performs a quick head-to-toe assessment (including alertness) and gathers basic vital signs, including heart rate, blood pressure, blood glucose level and oxygen saturation.

If the vital signs and assessment are within normal limits, the PIIP patient is asked if they want a ride to MATS. The patient may decline transport to MATS as long as they are alert and oriented to person, place, time and date (A&Oà—4). If the assessment reveals that the patient isn’t A&Oà—4, is in need of medical attention, or is severely intoxicated, then the PIIP unit requests a 9-1-1 medical dispatch for transport to a local ED.

GETTING STAFF ON BOARD

Proactive changes in the fire service require forethought, aggressive attitudes and a paradigm shift from the norm. After all, firefighters fight fires, right? Not anymore. A study in 2012 found that the number of fires in the U.S. has fallen by more than 40% over the last 35 years.4

So how did AFD sell the PIIP program to firefighters and APD police officers? Education, education, education. By educating the city’s firefighter/EMTs and police officers on the positive impacts of PIIP, they understood and believed that they could make a decisive difference in Albuquerque–that lowering a specific group of non-emergent 9-1-1 calls can and will directly affect several areas of public safety, providing: 1) proper navigation and treatment of PIIP customers; 2) more ED beds for emergency 9-1-1 patients; 3) more jail and detention center beds for true offenders; and 4) longevity to both the city’s first responders, response units and equipment.

The PIIP program was made possible by grant funding, not to AFD or APD, but a grant awarded to MATS by the UNMH. The UNMH ED is constantly overcrowded with patients in need of detoxification services and, in order to alleviate those numbers, UNMH awarded MATS a $416,000 Serial Inebriate Intervention Program Grant ($104,000 per year, 2013—2017) to keep serial inebriates and substance abuse customers out of the hospital’s ED.

The UNMH grant funds only the intake and care for PIIP patients at MATS. UNMH saves money by not admitting inebriates as patients and MATS makes money by caring for them. The AFD/APD PIIP unit doesn’t receive any grant money and is provided by the city’s public safety departments–funded by taxpayers. Funding AFD and APD participation in the program is the main obstacle, and it’s blocking expansion of other possible CEMS programs.

To offset the costs of Albuquerque’s PIIP (as well as future CEMS programs), all funding sources must be investigated. State or federal government grants, like FEMA’s Assistance to Firefighters Grant Program or the Centers for Medicare and Medicaid Services (CMS) Health Care Innovation Challenge Award, are two potential funding sources.

Other possible sources include private industry grants and awards, like the Patient-Centered Outcomes Research Institute (PCORI), which awards grants to organizations for new ways of improving healthcare systems.

Local hospitals may be the most successful funding source for CEMS programs, because they’re the most financially affected. In Albuquerque, an ED visit is eight times more costly than an urgent care clinic visit–$1,423 vs. $178, respectively.5 Imagine that number multiplied by thousands of nonpaying inebriate patients and it’s readily apparent that future funding of AFD’s PIIP is a smart hospital investment.

It can be reasonably assumed that it would be more fiscally responsible for both hospitals to pay for PIIP (and other CEMS programs) than continuing to pay CMS ED readmit penalties, which will grow to 3% in 2015.6

At the end of April 2015, PIIP numbers were reevaluated and the two years of data indicated the program was having a direct impact on Albuquerque’s frequent 9-1-1 customer encounters. AFD keeps records–including names–of all 9-1-1 and PIIP patients, allowing AFD to generate a report showing how often 9-1-1 was used. Comparing customer names from 9-1-1 call records and PIIP data showed that the inebriate population in Albuquerque frequently calls 9-1-1 for non-emergent events.

Although these results are compelling, they don’t neatly transform to dollars and cents. When attempting to analyze cost vs. benefit, especially when dealing with previously funded resources, one must get creative, using old costs and projections in order to answer the revenue question.

Simply put, revenue is the return on an investment. In this case, the return can be measured several ways: the right care for PIIP customers; bettering the EMS/9-1-1 system; and being fiscally responsible.

The city is paying $127,000 per year to staff the 40-hour per week PIIP unit with one AFD firefighter (regular time) and one APD officer (overtime), and the program is positively impacting all partnerships within the city. Along with preventing regular on-duty police and fire units from responding to the 2,828 non-emergent customer callouts, the PIIP unit has directly saved local EDs 1,931 avoidable admits–a nearly $2.5 million savings based on UNMH’s average cost per ED visit.5 In addition, AFD’s contracted transport provider, Albuquerque Ambulance Service (AAS), owned by Presbyterian Hospital, has saved over $1 million in avoidable patient transports by not transporting the 1,931 PIIP customers to local EDs7–a service provided free of charge by AFD and APD. 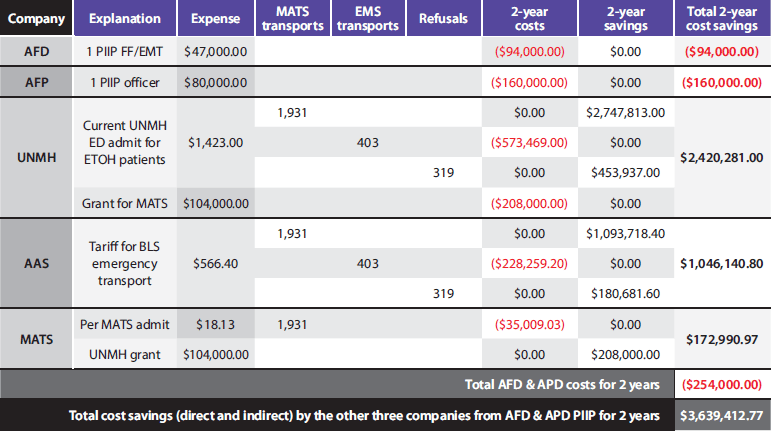 Taking all this into account, the AFD PIIP’s combined total savings for the city’s EMS system is $3.6 million. (See Table 2, above.)

Besides reducing the amount of frequent 9-1-1 calls and customers from previous years, the PIIP is directly saving Albuquerque’s fire and police units on fuel and wear and tear costs. By not sending an engine or rescue unit to frequent 9-1-1 callers, AFD can increase the life of their units, saving the city time and money on future purchases.

With the number of nationwide hospital ED visits continuously growing alongside increases in both non-emergent and repeat customers, opportunities exist for new CEMS programs like PIIP.6,8,9 With nearly a quarter of Albuquerque’s ED visits being non-emergent10 and a significant rate of repeat customers within 30 days of discharge;6 the use of the CEMS PIIP program must be continued; especially in light of 14 New Mexico hospitals receiving CMS ED readmit penalties ranging from 0.04% to 0.52% in 2013.11 Interestingly, according to the CMS 2013—2015 readmit penalties hospital list, Presbyterian Hospital has been penalized the last two fiscal years and UNMH, who funds PIIP, has not.12

Non-emergent 9-1-1 calls will continually perpetuate problems for Albuquerque’s EMS and hospital services unless the city continues to lead and expand their role in CEMS. Providing the most accurate patient care is our purpose; fulfilling that purpose through a successful and affordable CEMS program is an asset to the entire community. 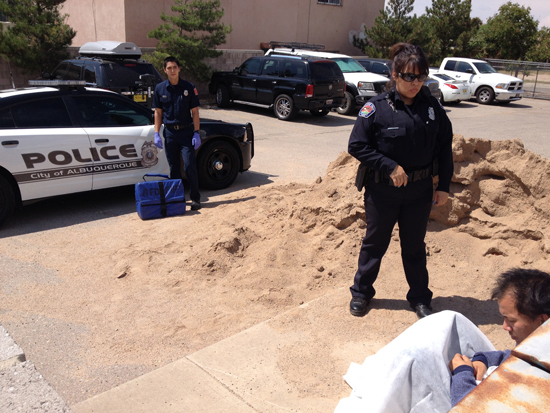 When the PIIP team encounters an inedbriate, the Albuquerque police officer makes first contact, clearing the scene of any dangerous issues or concerns and confirming it’s safe for the EMT to assess the patient.